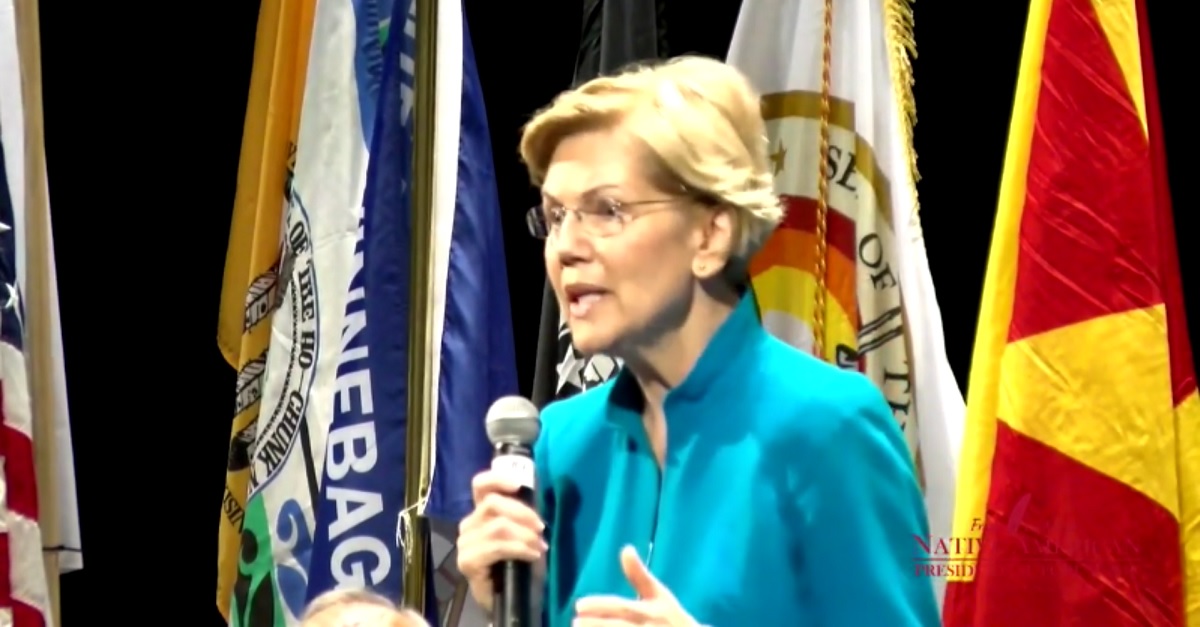 Politico Magazine contributing editor Bill Scher says that Massachusetts Senator Elizabeth Warren will still face a “Pocahontas problem” if she wins the Democratic presidential nomination, and that it “threatens the core of her candidacy.”

In a piece entitled “‘Pocahontas’ Could Still Be Elizabeth Warren’s Biggest Vulnerability,” Scher argues that relentless attacks by Trump could cause swing voters to question Warren’s honesty, especially if Trump connects the controversy over Warren’s past claim of Native American heritage with her integrity.

It’s a thorough piece of analysis, with extensive quotes from Democratic and Republican operatives, and it’s about half-right and half-wrong.

One particularly problematic element of Scher’s story is also, ironically, an argument in its favor. In promoting the piece, Politico and Scher have adopted Trump’s language by labeling the controversy a “‘Pocahontas’ problem.”

Analysis: If Warren becomes the Democratic nominee for president, she would still face a “Pocahontas” problem, one that threatens the core of her candidacy https://t.co/r9lor70b7z

Scher identifies many reasons — some persuasive and some not — for why Trump’s attack could haunt Warren in a general election, but misses the most dangerous one: the mainstream media’s inevitable complicity in it.

One of the Democratic operatives interviewed by Scher dismissed the possibility because, unlike the Hillary Clinton email story, “This isn’t drip-drip-drip. This is Trump beating a dead horse.”

In fact, the Democrats interviewed for the piece were dismissive of the entire controversy, which is a huge mistake. Every news story about Trump’s latest attack on Warren over the controversy will necessarily include all the details of Warren’s botched attempts to deal with the controversy. Trump will harp on it, and the media will harp on it with him.

And as one of Scher’s Republican sources pointed out, Trump and the Republicans will have little trouble finding ways to keep the story in the news. “We’re all kidding ourselves if you [think Trump] can’t find people who are going to stand up and say, ‘I was wronged in this process’ or ‘I’m a Native American and I think this is still inappropriate, and she never actually properly accounted for her misdeeds,” GOP consultant Dan Hazelwood told Scher.

Another flaw in Scher’s argument is that the attacks will damage Warren because it will make swing voters doubt her honesty.

Warren’s “crime” in this controversy hasn’t been dishonesty, but a consistent blindness to the potential seriousness of the issue. When it first surfaced during her Senate run in 2012, Warren stuck by her family lore explanation, and continued to stick by it, content to let the racism of the attacks against her be a shield.

The controversy even seemed to benefit her in much the same way that Barack Obama‘s years-long handling of the “birther” conspiracy benefited him, exposing his opponents as racists, except Obama had that long-form birth certificate in the hole.

All Warren had, after years of letting this issue snowball, was a DNA test that wound up being a political disaster for which she was still apologizing last week. The cold reality is that Warren has been playing defense, and bad defense at that.

And once Trump starts in on Warren, the media will make sure that she remains on defense. Trump won’t be pressed about his racist nickname for her, which won’t lose him a single vote, but Warren will be asked again and again to defend herself from the criticism. It won’t convince swing voters of her dishonesty, it will — barring some miraculous new strategy — make her seem weak.

That’s why Scher’s prescription for Warren is also flawed:

To avoid that pitfall, she should invest energy now in defining herself as “honest.” Without direct mention of the past controversy, she could collect testimonials from her professional past vouching for her integrity and promote them in ads and on the trail. That way, when attacks on her integrity are launched in full force, she will have already fortified her defenses—and in a way that is not reliant on political ideology.

Nothing makes you seem honest like ads telling you how honest someone is, right?

Warren would be better off completely ignoring Trump than going on a “trust me” ad blitz, but that’s not to say there’s nothing she can do. As Warren might say, I have a plan for that.

Polling shows that Trump’s disapproval among independents is driven by his racism, which also happens to be a major component of this controversy. In addition to lambasting the “Pocahontas” slur every time she hears it, Warren could begin devoting huge chunks of her stump speech to Trump’s racism.

And I don’t mean the standard Democratic line that passes for hard-hitting, I’m talking Beto “Jesus Christ, of course he’s racist” O’Rourke on steroids. I’d hire the best insult comics out there and have them come up with a vicious line per week, one that reporters would be guaranteed to ask Trump about. I bet Jeff Ross is available cheap.

And I’d have them think up a nickname, nothing too clever. “Li’l Grand Wizard” or “Racist Donnie” would do just fine.

Every Democrat should be doing this, but it would benefit Warren in particular because then, it would be Trump who would seem defensive, and be left with an attack that only makes him seem more racist.

Democrats are right to feel outraged that a woman as accomplished and talented as Elizabeth Warren could have her candidacy short-circuited by a racist toddler and a news media that refuses to learn its lesson, but they would be wrong to simply ignore it.