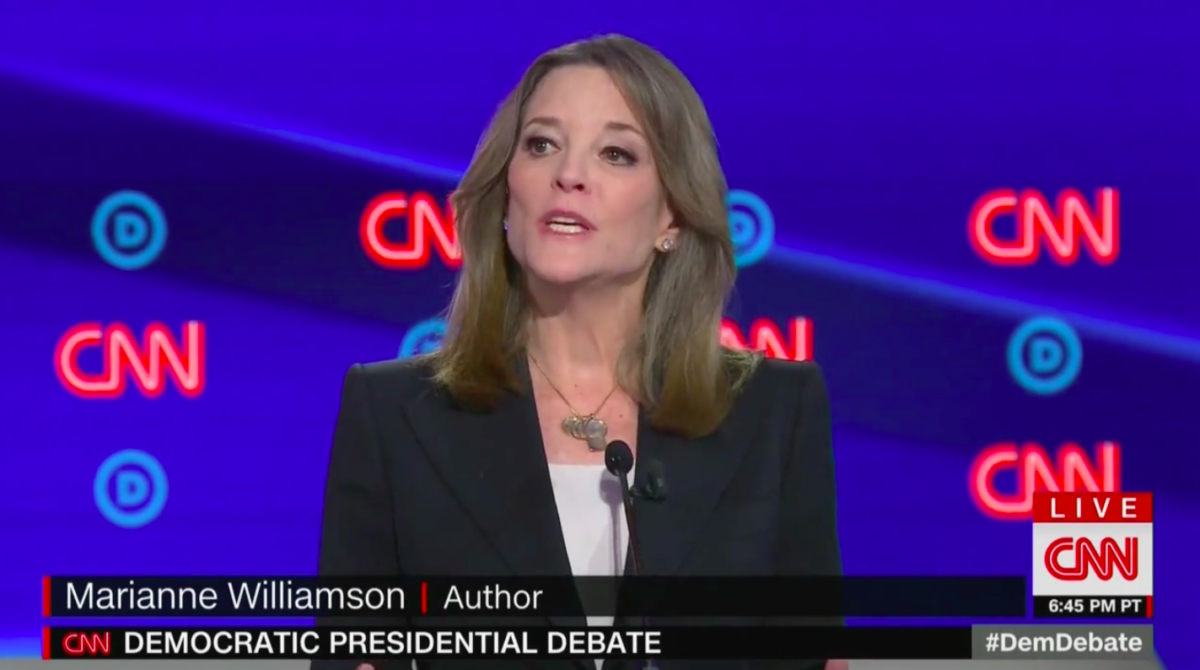 Judged purely by the initial reaction from media blogs and the Twitterati, the big winner of Tuesday night’s first CNN debate was none other than self-help guru Marianne Williamson.

Whereas her first debate performance a month ago prompted media to treat her like a curious novelty, the CNN installment featured a more confident Williamson that was clearly more comfortable playing the part of a remarkable outlier to the raft of professional politicians with whom she shared the stage.

It’s her embrace of the outlier status that makes her stand out so much from the others. That, and her ability to transcend predictable political talking points with relatable — and occasionally ethereal — language which has made her comments most buzzworthy.

The media reaction to Williamson’s unique status has only reaffirmed just how thirsty we all are for something new and surprising.

As time has passed and the cable news commentariat has been able to digest the first night’s debates, it’s Williamson’s performance that increasingly stands out from the pack.

Is she a serious candidate? It doesn’t matter! Need evidence, just take a look at the current administration. Williamson’s ability to confidently answer predictable questions by talking about “deeper” issues actually resonates, despite how schlocky and naive her rhetoric might might appear to the political cynic.

And before you dismiss her as just a self-help debate anomaly, know that there are other candidates who have followed a similar path. Mayor Pete Buttigieg benefited from a similar approach of reframing predictable policy questions into a broader context, a technique made successful thanks to his fresh face and young generation.

But the better comparison to Marianne’s “faithful” following? None other than President Donald Trump and his 2016 campaign. As a candidate, Trump infamously flouted all accepted conventional wisdom, and to great populist effect.

She does have a history of making what can best be described as “odd” claims, particularly in the realm of science, that will certainly serve as an impediment to a serious bid for the White House. Then again, candidate Trump faced those same hurdles and look where we are now.

Relatively speaking, a very small percentage of general election voters are paying very close attention right now.  And Williamson’s polling numbers are at the lower end of the spectrum compared to the top 4 or 5 candidates (before the CNN debate, try 0%).

But an upside of the broader electorate paying little attention this early in the race is that what matters most for these candidates is media fascination. And, for now, Williamson has that in spades. It is the very same thing that helped Trump break out from the pack in 2015 and 2016. But, it should be noted, by late 2015 Trump was leading the polls, whereas Marianne is not.

Nevertheless — Williamson’s answers to predictable questions that reframe and reconsider accepted truisms with which the body politic has grown tired? That’s a refreshing addition to the primary rigmarole and suggests that Williams’s candidacy will take her from curiosity to legitimate contender.