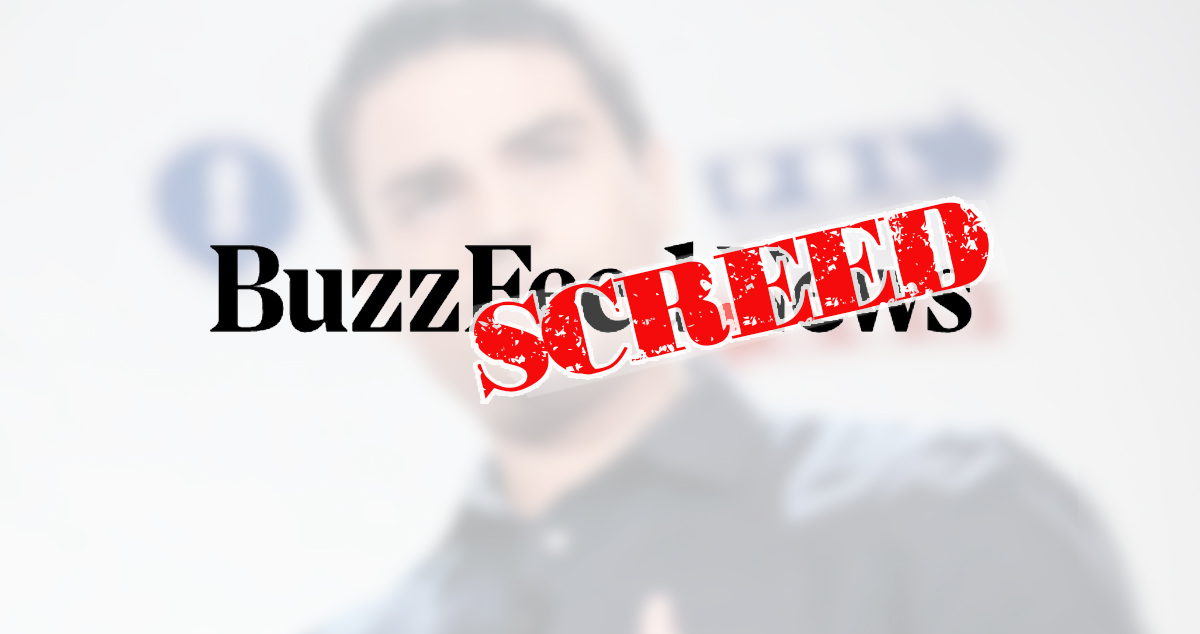 It’s probably time to start taking one’s time before sending a tweet. At least, if you’re a website like BuzzFeed that tweets thousands of articles. Or at the very least, if you’re actually retracting a previous incorrect tweet touting one of those articles.

BuzzFeed got a lot of heat, as did other outlets and people on Twitter, over a story suggesting Orthodox Jewish conservative Ben Shapiro is basically a mouthpiece for Nazis. They weren’t sorry, but they did get a fact wrong, and in a snotty and snarky retraction that was actually designed to reemphasize their original anti-Semitic insult to Orthodox Jewish conservative Ben Shapiro, they managed to get it wrong again.

Maybe focus on the facts and not the snot? Just a thought. 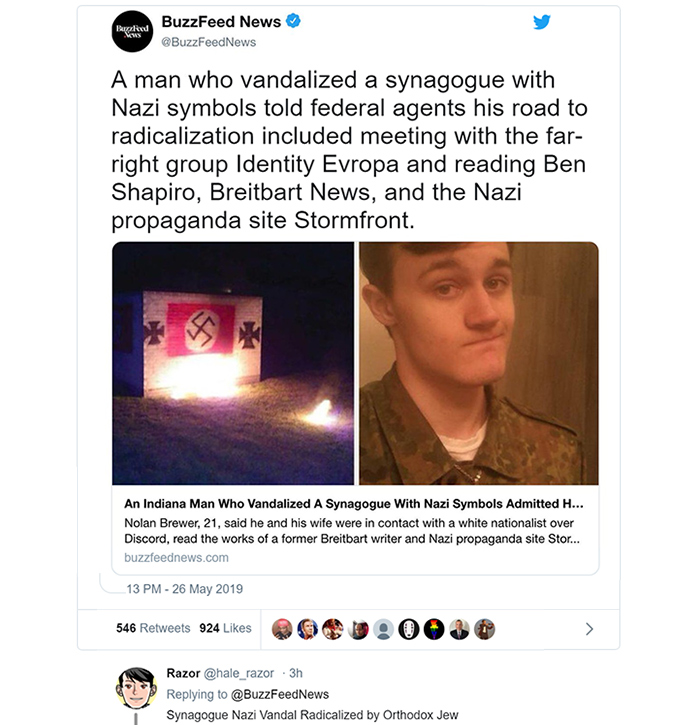 And here is the problem, pointed out by Emily Zanotti, of Shapiro’s Daily Wire. 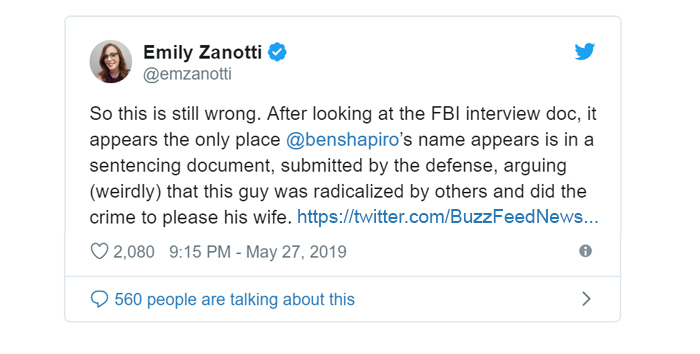 So to unpack that. The original tweet said that “A man who vandalized a synagogue with Nazi symbols told federal agents his road to radicalization included meeting with the far-right group Identity Evropa and reading Ben Shapiro, Breitbart News, and the Nazi propaganda site Stormfront.”

That is wrong because the man didn’t tell federal agents that.

Then they retracted it with a snarkastic “fake but true” correction that says “We have deleted this tweet because it was inaccurate: the man told prosecutors his road to radicalization included his wife reading Ben Shapiro, Breitbart News, and the Nazi propaganda site Stormfront.”

And that is wrong, also. The man also did not tell prosecutors that.

In fact, as the court documents show, the man’s LAWYER brought up Shapiro prior to sentencing in hopes of mitigation, in the context of naming his WIFE as the one who radicalized him. The defendant’s attorney said that the wife read Shapiro, to the court. The “man” did not tell “prosecutors” anything of the kind.

This is directly from the sentencing memorandum.

“Every evening, Kiyomi would share her views with Nolan and ask him to read articles she had found. According to Nolan, she began with rightwing yet mainstream views such as those presented on Fox News. She then moved on to writings by Ben Shapiro and articles on Breitbart News which bridged the gap to the notorious white supremacist and anti-Semitic propaganda site Stormfront. Nolan Brewer, for his part, bought into the propaganda. He wanted to please his new wife and the material seemed to make sense to him.”

As with the difference between a doctored video and one that is only edited, these are not distinctions without a difference.

It matters that the defendant didn’t tell federal agents or prosecutors this information, but that he told his own attorney, who told the judge. Because those are what are called facts. And BuzzFeed got them wrong. They can have all the attitude they want about how it doesn’t change their original point, but they were wrong. And then they were wrong again when they were sort of admitting they were wrong.

But it’s also revealing. The order in which they presented the info (Shapiro first), the manner in which they presented them (co-equal contributing factors), and the attitude about the correction are because they, and nearly every other Democrat and liberal commenting on this, (most buying into BuzzFeed’s “fake but true” attitude) intend, and are offended at any contrary suggestion, that your takeaway be that Shapiro is the same as a Nazi.

I realize that subtlety and fine points and nuance aren’t the preferred footings in media with Evil Orange in office, but the fact that the information was listed in a particular order, with particular levels of import, and particular roles in the defendants “radicalization” actually matter, which is why the lawyer was careful to say them in a certain way. Flip it around if you don’t believe me.

“A man who tried to murder multiple Republicans at a softball practice told federal agents his road to radicalization included meeting with other liberal protesters and volunteering to work for Bernie Sanders.”

But of course, that’s not how they wrote or write about that radical. It’s nuanced.

In an article at the Washington Post which makes the influence of “conservatives” the primary story his this vandalism case (despite prosecutors cautioning against that, saying “what is relevant is Brewer’s receptiveness to the Nazi ideology, the thinking of Adolf Hitler, and the racism and anti-Semitism that accompanies it”), the reporter Katie Mettler attacked Ben Shapiro’s defense of his writing as an Orthodox Jewish conservative who isn’t a Nazi.

Here is a portion of that:

Shapiro and other conservative commentators have taken to social media to defend Shapiro’s work, arguing that his identity as an Orthodox Jew made him an unlikely source for the Brewers’ anti-Semitic ideals and actions.

“Yes, if there’s one thing I’m known for — as one of the most prominent Orthodox Jews, targets of the alt-right, and critics of the alt-right in America — it’s directing Nazis to attack synagogues,” Shapiro wrote in a tweet Sunday. “What garbage.”

Shapiro is a leading conservative voice among millennials, a Harvard Law graduate with millions of social media followers. He has criticized President Trump but upholds many of the same views as the conservatives who support the president do — including outlawing abortion, repealing the Affordable Care Act and cutting taxes for the wealthy. He previously worked for Breitbart News.

The “but” there is absolutely the most telling part. He claims not to be a Nazi, BUT he shares some policy ideas in common with Trump.

Amazing. And scary. And 100% the dominant view of media and progressives talking about this story.

Yet it is on its face absurd to draw a direct line from Ben Shapiro to the burning of a house of worship of his own faith, as anyone can plainly see, and moreover the evidence of that line does not exist; it was made up by BuzzFeed, which can’t seem to differentiate between a direct line and a web of simultaneous events. And it is passing absurd even further that BuzzFeed and the Washington Post think the most noteworthy and, and this is key, most influential part of this evil man’s path to crime is reading Trump-critical Jew Ben Shapiro in an impersonal article, rather than the DIRECT INTERACTION WITH ACTUAL NAZIS WITH WHOM HE SOCIALIZED AND THE INTERACTIVE FORUM WEBSITE WHERE THEY CONVERSED ONLINE.

But that’s because this is a hit job, not analysis. It’s not a warning, it’s not “a lesson to learn” and it’s certainly not a caution on their part. It’s an active, partisan hit job meant to dirty all conservatives everywhere as Nazis, even if they are anti-Trump Jews, based strictly on having some policy ideas that aren’t the ones progressives prefer. That’s why they were so snotty and defensive about getting their facts wrong. It’s because they would rather you focus on their message, not their details.

But, to paraphrase what Ben Shapiro so frequently says, facts do not care about BuzzFeed’s feelings. And they got the facts wrong.