Why Are The Oscars Ratings Down? (Hint: It Has Nothing to Do With Liberal Hollywood Elites) 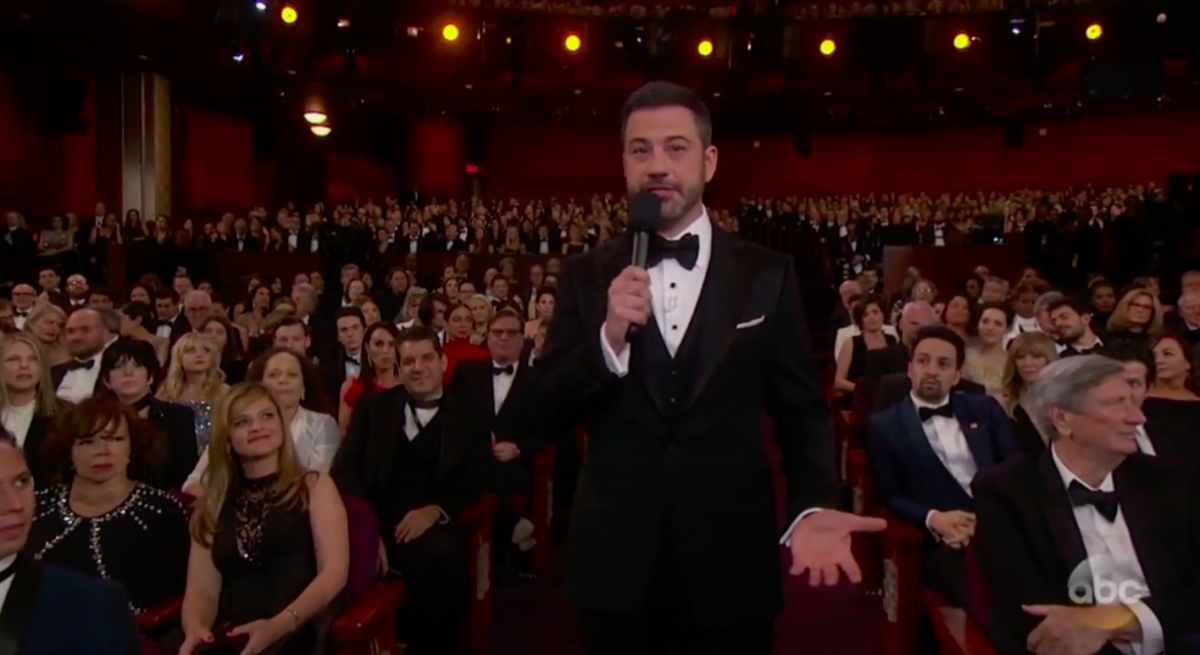 The Nielson ratings for ABC’s 90th Academy Awards broadcast are in and, well, they were fairly pretty bleak. The overall ratings are down a steep 19 percent from last year, making it the second lowest viewed telecast in Oscars history.

You could just about hear the frothing at the mouth from right-wing media entities, feverishly writing think pieces on the true reason for the ratings decline: America is sick and tired of being preached to by those sanctimonious Hollywood hypocrites, with their anti-abuse agendas and their desperate calls for gun control. And that’s despite George Clooney, who receives actual death threats on the regular, having his own armed guard!

So, that’s it, right? Case closed. America is sick of Hollywood and their SJW culture of emasculation and snowflake cuckoldry. Where back in the good old days families would crowd around their TV sets on Sunday night for a wholesome celebration of cinema, they’re now turning off the tube in a desperate bid to avoid Jimmy Kimmel’s virtue signaling.

Not quite. Like most things in life, the Oscars shedding viewers has more than one reason. Maybe a few people didn’t watch because Sean Hannity told them not to, but a great deal of others didn’t watch for a myriad of different reasons. Let’s go through them.

Nobody had heard of any of the movies.

This one is semi-subjective but, more or less, this year’s ceremony didn’t have any break out hits that folks could rally behind. A love story about a lady sexing up a fish won Best Picture. Ratings, at the base level, depend on interest, as pointed out by the Daily Beast’s Andrew Kirell:

Biggest Oscars ratings years in recent memory? “Lord of the Rings” and “Titanic” were nominated for BP. Ten years ago—mostly niche films, but arguably the greatest “Best Picture” pool—rated the worst ever. It’s easily predicted, but whiney conservatives will whine.

Would you watch a Super Bowl between the Cleveland Browns and the Detroit Lions?

Stop me if you think you’ve heard this one before. We are on the cusp of not one, not two but three entire generations of Americans that are foregoing cable television in favor of Internet streaming sites like Netflix and Hulu. That’s only the beginning. There’s also video games, fooling around on your tablet, Spotify, reading a damned book, surfing the Internet and, oh yeah, compulsively following our president’s Twitter account like a lunatic.

Nearly four percent of cable television subscribers cancelled their accounts in the final three months of 2017 alone. Seriously. Four percent in three months. We are on the cusp of an absolute industry collapse.

In short, we live in a segmented society, with entertainment options catered to the individual. The Oscars may be one of the closest things to a “sure bet” on television, but a ratings smash in 2018 would have been cancelled in three episodes back in 1988. The series finale of M*A*S*H garnered over 120 million pairs of eyeballs. The highest rated episode of Game of Thrones got around 12 million.

Not to toot our own horn, but we are part of an industry that watches this stuff so you don’t have to. We clip the best parts and post them in easily digestible segments. In the old days, if you wanted to not sound like an absolute boob around the office water cooler, you’d have to plop your butt on the couch for four, yes four, hours and watch the entire damned ceremony from start to finish.

Now you can just hit up your favorite website and be caught up in ten minutes, thus saving yourself three hours and fifty minutes of mistimed music cues and Toyota commercials. It’s a no brainer. Hell, I didn’t even watch the awards, but I know just as much about them as some poor sap who did.

The Oscars, and ceremonies like it, have essentially remained unchanged for nearly 100 years, as every other part of society has transformed to be utterly unrecognizable. You get some mediocre jokes. You get attractive, rich people thanking their managers. Sometimes you get a gaffe, if you are lucky. It’s a formula that, maybe, we are just growing tired of, across the political spectrum. There is, after all, a trivia game on our smartphones where you can win actual money! That’s much cooler than Clooney in a tux.