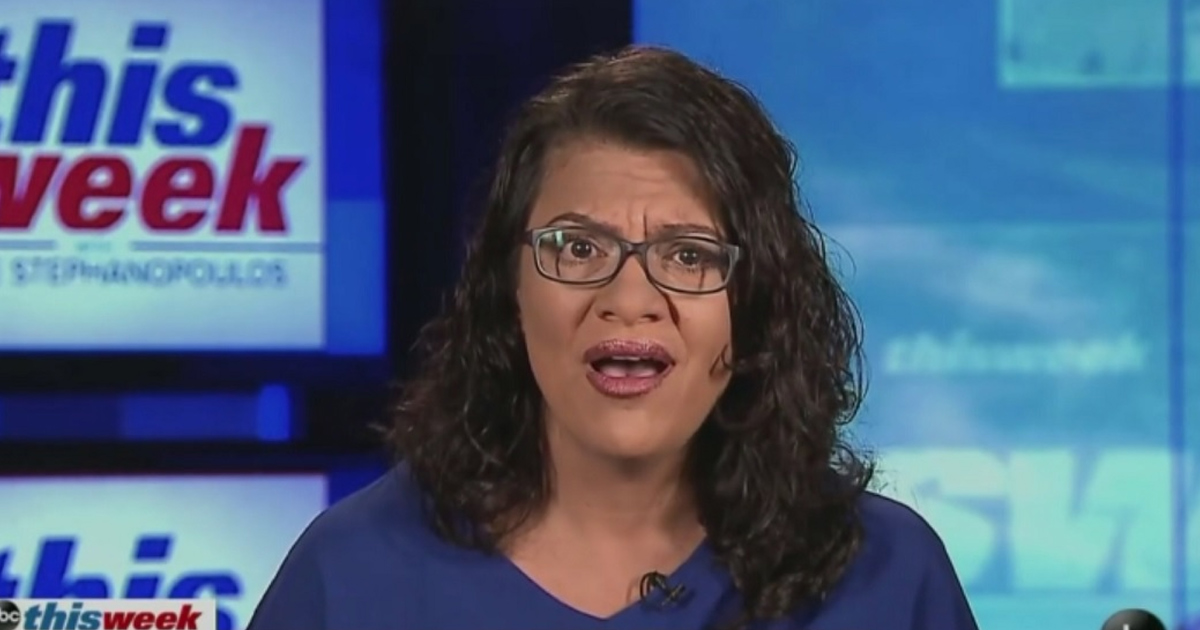 Rep. Rashida Tlaib won’t be accepting the offer by Israel to allow her to visit her grandmother. The nation, which barred her visit initially, made an exception on humanitarian grounds that Tlaib could visit if she agreed to their conditions.

Tlaib, under pressure from the radical group who sponsored her visit, requested and then un-accepted that invitation. She tweeted about her decision, saying that “treating me like a criminal” is not her grandmother would want for her.

She said she can’t “allow the State of Israel to take away” the light she is shining on “inhumane” conditions” by “humiliating” her.

When I won, it gave the Palestinian people hope that someone will finally speak the truth about the inhumane conditions. I can’t allow the State of Israel to take away that light by humiliating me & use my love for my sity to bow down to their oppressive & racist policies. https://t.co/OYIwExV0ga

Silencing me & treating me like a criminal is not what she wants for me. It would kill a piece of me. I have decided that visiting my grandmother under these oppressive conditions stands against everything I believe in–fighting against racism, oppression & injustice. https://t.co/z5t5j3qk4H

Contrary to the notion that she was being silenced by Israel, though, her own letter requesting the visit specified she would not engage in BDS activity.

But the on-again-off-again visit was more like a PR stunt than an actual effort on her part, according to some.

TLAIB: Give me a visa so I can destroy your nation from within.
ISRAEL: No.
TLAIB: Ok. Can I at least have a humanitarian visa to visit my dear gamgam? Pretty please? She needs me.
ISRAEL: Sure. But no Nazi crap while you’re here.
TLAIB: Never mind.https://t.co/gjjALQoV4s

Tlaib hates Jews more than she loves her grandmother — which is pretty much a microcosm of the Israeli-Palestinian situation. https://t.co/xeuJw7yd42

Maybe Tlaib doesn’t really want a visit with her grandmother … and would rather have the *issue* remain alive. https://t.co/V5vfm4td2W

So Israel cuts her some slack & she comes back & talks more smack after they grant her request & declineshttps://t.co/n0X0KINeAp

What a complete & utter embarrassment she is https://t.co/i4a5QhBtUk

The article that @RashidaTlaib tweeted says “Tlaib then submitted a request and, on Friday, the Israeli Ministry of Interior said she would be allowed to visit her family in a strictly personal trip…”

So she submitted a request and then publicly turned it down when approved? https://t.co/LapER2j8Wz

Omar: “Israel has hypnotized the world.”

Israel: “Fine, you can come, just don’t call for a global boycott of our country for a few days.”

Tlaib whined to go to @Israel and @IsraeliPM said no b/c they let NO ONE in who supports the hate-based BDS nonsense. Israel then granted permission for Tlaib to come but Tlaib now say she isn’t coming. It was NEVER abt visiting for her; was about making a scene.

Huge congrats to Rashida Tlaib, whose bigotry and unparalleled political skills have joined forces to explode her grievance narrative, shift the PR battle back into Israel’s favor & gratuitously shun her own grandmother?

No one said Tlaib can’t express her opinions about Israel. The law is specific – it’s about boycotts. And she knows that, she only mentioned not promoting boycotts in the letter to Deri. https://t.co/BLBpQtqFMi

The group that sponsored the trip, which pressured Tlaib not to accept the humanitarian visit with her grandmother in exchange for agreeing not to participate in anti-Israel activity while there, is also facing heavy criticism.

Under the heading “Is Israel the Only Possible Homeland for Jews?”, this article questioning the appropriateness of Israel as the location of a Jewish homeland was posted by Miftah, one of the sponsors of the proposed Tlaib/Omar visit to Israel:https://t.co/KX1PwrZGy1 pic.twitter.com/eMPOfhopYQ