Here Are The Six Current Members of Congress Who Voted Against Martin Luther King Jr. Holiday

Here Are The Six Current Members of Congress Who Voted Against Martin Luther King Jr. Holiday 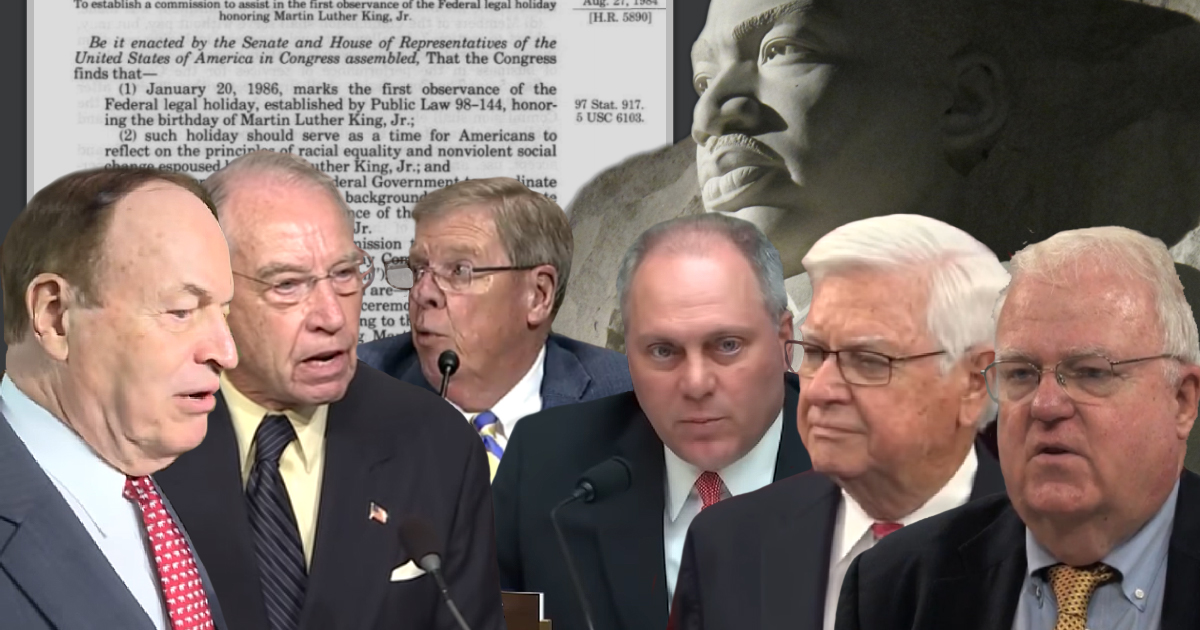 As Vice President Mike Pence spends Martin Luther King Jr. Day catching hell for claiming that Donald Trump is just like Dr. King, it’s worth remembering that six current members of the U.S. House and Senate voted against King holidays. All are currently members of the Republican Party, although one was a Democrat at the time.

Then-President Ronald Reagan reluctantly signed the federal Martin Luther King holiday into law in November of 1983 after the U.S. Senate passed the bill by a 78-22 margin, while the House of Representatives had voted in favor of it by a margin of 338-90. That’s over 78 percent of those who voted, well above the two-thirds needed to override a veto.

He was joined by Rep. James Sensenbrenner (R-WI) and Rep. Hal Rogers (R-KY), each of whom still serve in the House.

Two other currently-serving members of the House cast votes against state King holidays before being elected to Congress. Senator Johnny Isakson (R-GA) voted against the holiday as a state lawmaker in 1984, and current House Minority Whip Steve Scalise (R-LA) voted against it twice, in 1999 and 2004.

In the past, Scalise reportedly pitched himself as “David Duke without the baggage.”

As of this writing, three of these six current members have tweeted messages about this year’s King holiday:

Today we honor the remarkable life & legacy of Dr. Martin Luther King, Jr., who paved the way for equality. He preached at Montgomery’s Dexter Ave Baptist Church for years, with a mission to impact lives. We must continue to work toward & achieve his dream of unifying our nation. pic.twitter.com/tkApiAqBu9

Dr. Martin Luther King Jr. Day became law almost 36 years ago. What votes are today’s members of Congress going to be asked about 36 years from now?