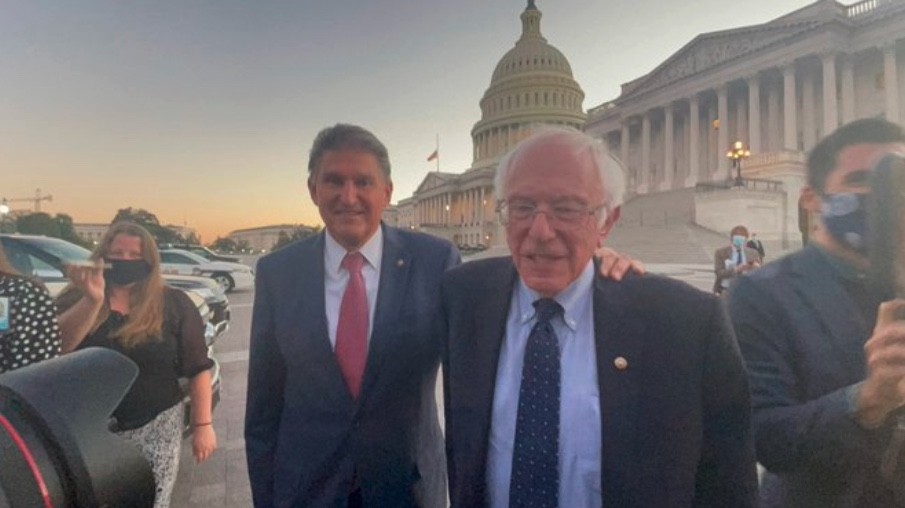 Sanders strongly backed a $3.5 trillion spending package over the next 10 years that addressed a myriad of issues from climate change to child tax credits to an expansion of Medicare. However, that bill is currently being pared, as Manchin has long said he is averse to the sticker price. In particular he has cited several climate change provisions as nonstarters, and has said that child tax credits should be means tested.

The two met on Monday and were swarmed by reporters as they left the Capitol.

“Here, get a picture,” said Manchin, as he began to pose with Sanders. “We’re talking.”

“You’re gonna have a resolution by the end of the week at some point?” asked a reporter.

As the two men get into separate vehicles, Manchin tells Sanders, “Never give up, Bernie.”

On Friday, Sanders published an op-ed in West Virginia’s largest newspaper and called on Manchin to support a large spending bill. “Poll after poll shows overwhelming support for this legislation,” Sanders wrote. “Yet, the political problem we face is that in a 50-50 Senate we need every Democratic senator to vote ‘yes.’ We now have only 48. Two Democratic senators remain in opposition, including Sen. Joe Manchin.”

The other Democratic senator who has so far withheld support is Kyrsten Sinema (D-AZ) who has been downright opaque about what she wants, at least publicly.

On Friday, Manchin issued a response to Sanders’s op-ed that read in part, “This isn’t the first time an out-of-stater has tried to tell West Virginians what is best for them despite having no relationship to our state.”