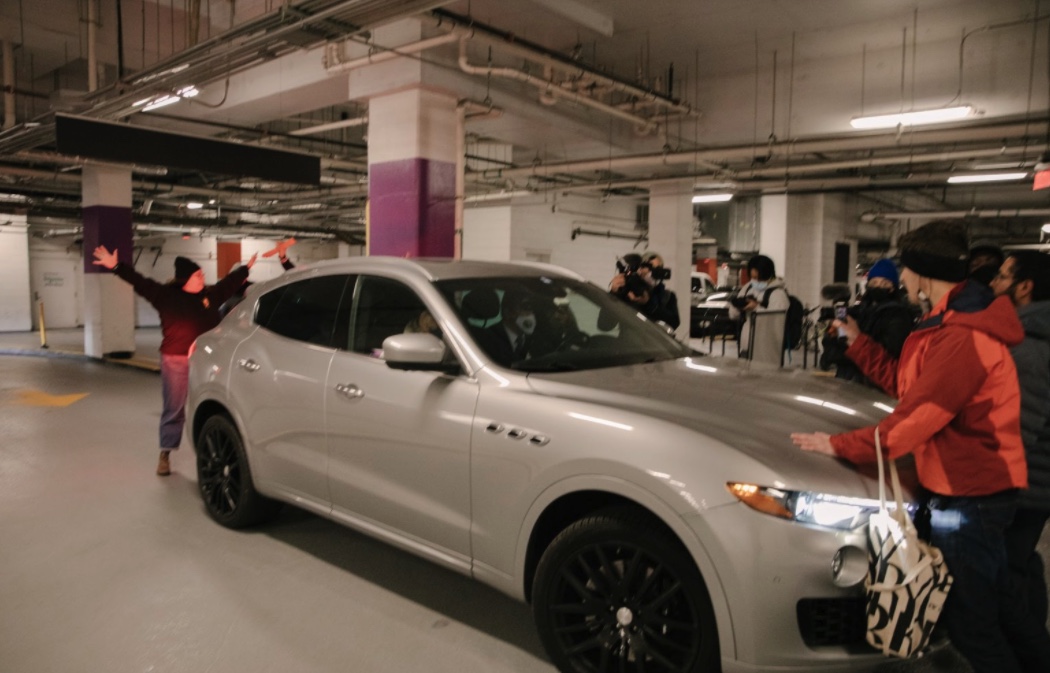 Sen. Joe Manchin (D-WV) was loudly confronted by numerous Sunrise Movement climate change activists on Thursday morning. They greeted the West Virginia senator outside of his houseboat this morning and followed him to his Maserati, according to HuffPost’s Jennifer Bendery.

The activists were protesting his opposition to large portions of President Joe Biden’s Build Back Better agenda, including measures related to climate change. Manchin was heading toward a parking garage as a large group of protestors surrounded him chanting, “We want to live!”

BREAKING – Young climate activists with @sunrisemvmt confronted Sen. Manchin as he stepped off his yacht this morning. “We want to live!” they say. This comes after Manchin once again declines @POTUS’ Build Back Better Act, holding hostage significant investments in climate. pic.twitter.com/oT82sXiFZw

The senator mostly ignored the crowd.

Then as Manchin attempted to leave the parking garage, protestors blocked his exit, prompting the senator to go in reverse.

DEVELOPING– After @Sen_JoeManchin walked away without giving any answers to the @sunrisemvmt activists who confronted him for obstructing @POTUS’ climate and jobs package, they blocked his exit from the parking lot demanding answers. pic.twitter.com/qoRF9T6TyX

Some of the protestors followed Manchin back into the garage. In a TikTok video posted to Twitter, a voice claims the senator “tried to run us over,” but that statement does not appear to be justified by what the video shows.

umm did @Sen_JoeManchin try to run climate youth over??? nothing he loves more than using fossil fuels to hurt people @HungerStr1ke pic.twitter.com/HOSVLOLjzL

Demonstrators continued chanting, “We want to live!” as they hurled themselves in front of Manchin’s moving vehicle.

The incident comes a little more than a month after protestors on the campus of Arizona State University took heat for creepily following Sen. Kyrsten Sinema (D-AZ) into a ladies’ room and filmed the encounter.

Democrats – especially progressives – have heavily criticized Manchin and Sinema for being the two most vocal and visible roadblocks to the Biden agenda. Originally, price at $3.5 trillion over 10 years, the pair of Democrats have succeeded in paring the current iteration down to $1.75 trillion.

The two senators’ support is needed to pass the bill through budget reconciliation in the 50-50 Senate, as no Republican will vote to support the legislation.