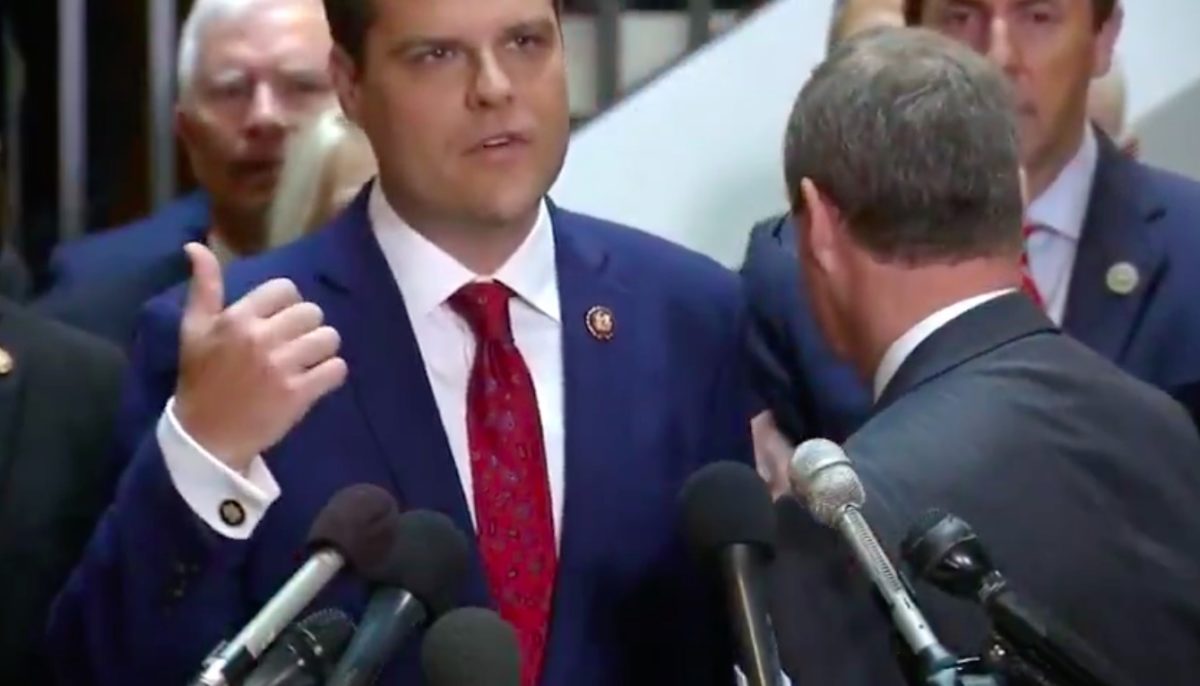 Reps. Matt Gaetz (R-FL), Steve Scalise (R-LA), and Lee Zeldin (R-NY) bum-rushed a closed doors Democratic hearing with Laura Cooper, a Pentagon staffer who works on Ukrainian matters, while flanked with an entourage of other House GOP members in an attempt to shut down Cooper’s Tuesday impeachment inquiry session.

Close White House allies Zeldin and Gaetz set up a presser outside the Sensitive Compartmented Information Facility (SCIF) where Democratic lawmakers were questioning Cooper regarding President Donald Trump’s potential misconduct with Ukraine, during which Gaetz slammed Democrats for being “obsessed with attacking” the president via a series of “secret interviews, selective leaks” and announced that the group of Republicans were “going to go and see if we can get inside.” After describing the hearing as a “Soviet-style process,” two dozen GOP lawmakers entered the SCIF where Cooper was testifying while carrying their personal cell phones with them — a move that is a violation of SCIF security policies.

Led by @MattGaetz and assisted by @SteveScalise, House Republicans stage a publicity stunt in which they try to storm the doors of the House Intelligence Committee as they hold the Trump impeachment inquiry. This is an attempt to squelch the negative news about quid pro quo, etc pic.twitter.com/4EsfsVo38k

The group of Republicans slowly forced their way into the room, despite not being involved with the three committees in charge of the private hearing, leading House Intel Committee Chairman Adam Schiff (D-CA) to pause the hearing. They justified the move by arguing that Republicans were being blocked out of the process; though, other GOP lawmakers who are members of committees involved in the impeachment inquiry were present during Cooper’s testimony and have been privy to all of the Democrats’ closed doors sessions.

An ABC News reporter noted that Capitol Police were forced to collect phones that GOP members brought into the SCIF and a Democratic lawmaker accused pro-Trump hardliner Rep. Louie Gohmert (R-TX) of “screaming” in protest.

Capitol Police are now sweeping the SCIF hearing room – b/c of all the cell phones brought in by members. Unclear how long this will take or when deposition will begin. https://t.co/UAg1cH3zKl

INSIDE THE ROOM: Rep. Connolly said two-dozen Republicans “stormed” into the SCIF, delaying the start of the Cooper deposition.

He said a few, including Rep. Gohmert, were “screaming,” and all brought phones into the secure SCIF room. (Rep. Conaway ended up collecting them.)