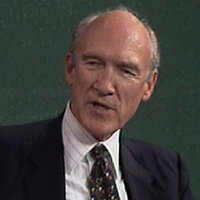 When President Barack Obama announced a commission to help solve the nation’s budget problems in February, he chose former Wyoming Republican senator Alan Simpson and former Bill Clinton chief of staff/current University of North Carolina president Erskine Bowles as co-chairs. Newsweek senior editor Weston Kosova took a look at the program in the magazine’s most recent issue, and, fortunately for readers everywhere, did it by interviewing Simpson. For some reason, the print edition teases the interview with the relatively tame snippet “No one forgives anyone,” but trust us that Simpson offered much more – read on to see it.

Simpson, described by Kosova as having “one of the sharpest minds – and tongues – in the U.S. Capitol” during his Senate days, displayed an endlessly entertaining combination of tough talk and folksy expressions in his interview. On the attitude that commissions can’t accomplish anything:

If that’s the outlook we have, then this country is just going to sink into the swamp, so it doesn’t make a rat’s fanny’s worth of difference what you do. Folks can say all the cynical stuff they want, but commissions do work.

If he didn’t win you over at “rat’s fanny” (and even then, he might still), we don’t know what to tell you. Here he is on the lack of civility in Congress these days. Be prepared to feel bad about yourself:

It isn’t just Congress—Congress is a microcosm of America. You have guys jumping out of the stands at baseball games kicking the crap out of the players. You have hockey players bashing each other. You have city-council and school-board meetings that are just chaos … It isn’t all in Washington, I’ll tell you that.

And he hopes you feel bad about it. But don’t worry too much: you’re about to see some of the finest handling of the topic of Rush Limbaugh you’ve ever seen:

I never considered Rush-babe to be anything more than an entertainer. He gets people all riled up all day long, get them filled up with gas, ulcers, heartburn, B.O., and fear. Hell, that’s pretty good. You really are an entertainer if you can get that done!

It’s all there. The (correct) labeling of Limbaugh as an entertainer and nothing more (albeit a very, very successful one). The excellent nickname “Rush-babe,” the list of adverse health conditions – and then he turns it into a compliment! How did he do that? The only trifle we have here is that he lumped in ulcers with other conditions that arise from getting “riled up” – but, as we now know, peptic ulcers (which we assume Simpson refers to here) are caused not by stress, but largely by Helicobacter pylori. Still, a fine job.

He goes on to say that distortion of politicians’ records is “all BS. I don’t have to take that nonsense” (hence, this post’s title). He says of those who will try to distort his record on taxes, “I’m going to shove it right up their nostrils.” And his best is somehow still yet to come:

The people who distort the commission and try to scare people into doing nothing, let’s say they win the day, and we don’t do anything to try to bring down this debt. Well, great. They’ve got grandchildren, too, and in 40 years they’ll be sucking canal water and picking grit with the chickens.

Sucking canal water and picking grit with the chickens. (In both cases, emphasis ours.) In spite of itself – and it’s really a pretty grim prediction – it just sounds so…right. There might be an entire philosophical movement to be had with this phrase as the rallying cry, but for now let’s just agree that Alan Simpson is a Pulitzer-worthy wordsmith, and let him close with his thoughts on filibusters.

The filibuster will be there long after I’ve been thrown in the hole, because it’s like a big old hobnail-boot ass-kicking machine. Right now the boots are kicking the Democrats around, but in 10 years it will be the other way and the Republicans will be getting kicked…the filibuster is terrible, unless you’re using it on the other side and watching them standing there with tears streaming down their cheeks.

Is there anyone who couldn’t get behind this sentiment? Simpson’s said more than enough (and the interview was only one page!), so the one thing we’ll say for him is: after reading this, even though he’s 78, President Simpson doesn’t have such a bad ring to it.