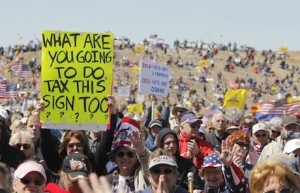 The New York Times reports that Tea Party leaders are still not happy with the establishment in Washington and especially not Republicans. Not only are they angry because candidates supported by Tea Party groups were denied leadership positions, but also because Republicans, in their view, were taken to the cleaners by Democrats in the lame-duck session, allowing tons of bad legislation to be passed.

Mark Meckler, a co-founder of Tea Party Patriots, said “the Republicans, frankly, have been a disaster,” and Judson Phillips, founder of Tea Party Nation, claimed “the G.O.P. has caved” on passage of the arms-control treaty with Russia. Meanwhile, Mike Lee, the incoming Tea Party backed senator from Utah told the Times that with Democratic control in Washington, “I don’t think there are many people who are expecting that the government’s going to be transformed overnight into something in the image of the Tea Party. That would be delusional.”

No matter how “delusional” the demands of the Tea Party, overall their influence cannot be ignored. With a vigilant Tea Party now monitoring every vote every Republican takes, compromise between the parties may unfortunately be more difficult in the future, however the tradeoff of making entrenched politicians continually feel accountable for their actions may in fact be worth it. Some may consider Tea Party leaders impatient and unrealistic, but a more appropriate description seems to be persistent, idealistic and, if necessary, willing to drag the Republican party kicking and screaming towards a change they believe in.

Check out the full article.