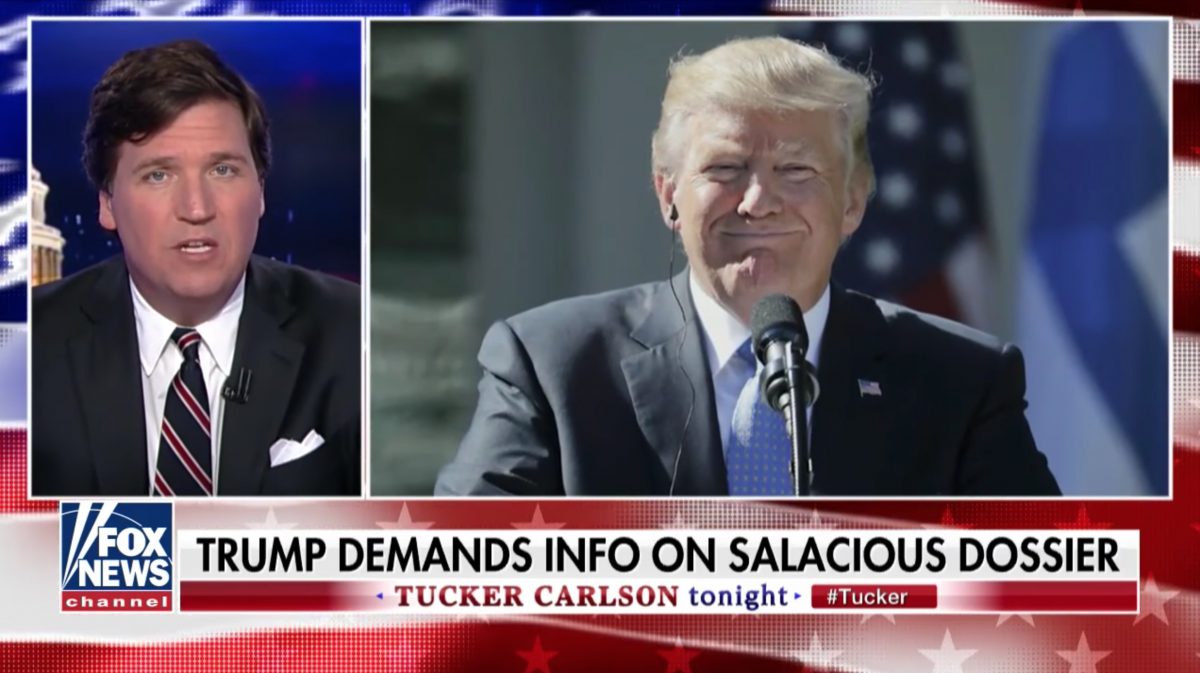 By far the most gossiped about aspect of the highly controversial Trump dossier complied by former British spy Christopher Steele is the infamous “pee tape” allegation, which holds that Russian President Vladimir Putin is in possession of lurid footage of his U.S. counterpart. Many people believe this tape of Trump with Russian prostitutes not only exists, but it is the cornerstone of the leverage that Russia appears to have over Trump, causing him to be completely impotent when it comes criticizing Putin, or fighting back against Russian election meddling.

I have never felt strongly, one way or the other, about the existence of such a tape, which Trump has denied on the grounds that he is a well-known “germaphobe.” On the one hand, the story seems too crazy to actually be true and some of the details (like Trump wanting the women to urinate on a bed that Barack Obama had supposedly slept in) don’t make a lot of sense. However, the story apparently had multiple credible sources, and it was always hard for me to imagine how something like that could have been completely made up.

That is, until now.

A rather long excerpt of a brand-new book titled Russian Roulette released on Thursday. The book provides new details about how Trump’s efforts to cultivate a business relationship with Russia began to get serious with a series of meetings in Las Vegas during the Miss USA pageant, part of Trump’s Miss Universe pageant which would be held in Moscow in 2013 (when the “pee tape” was supposedly recorded).

According to the authors of the book, some of the key Russian actors — that we would later hear about during the special counsel’s investigation — joined the future president at an after-party at a Vegas nightclub called the Act, known for shows which simulated acts of sadomasochism and bestiality. Notably, there was one in which female dancers pretended to be college students urinating on their professor.

Now it is certainly possible that this is just a rather remarkable coincidence. In fact, the book doesn’t even claim to know if Trump and his Russian posse actually witnessed acts of urination that night. For the first time, however, we have a very real and logical explanation for how the “pee tape” story could have been disseminated by people — while still being mostly false.

It doesn’t require an expertise in how rumors get started and sometimes turn into urban legends in order to see the possible significance of this piece of information.

In this scenario, the Russians report back that they partied with Trump and that he is easily compromised because, heck they immediately went to a strip club where there was this crazy urination scene and he loved it. From there, the narrative gets connected to a separate story about Trump, who soon afterwards was being offered prostitutes while in Russia (something former Trump aide Sam Nunberg seemed to confirm during his public meltdown on Monday). And, perhaps, much like the Stormy Daniels revelations would lead us to believe, he might have willingly participated in.

Now you have two separate stories, both of which have real truth in them, which then get conflated and exaggerated in their telling among those in the bizarre circle of people related to this story. Once these two separate instances are merged within the rumor mill, you now have all the makings of a powerful urban legend which gets passed along as sincere truth.

Again, this is simply a theory, but it is one which also explains something that has always confused me about Trump’s treatment of the Steele dossier story.

It has been baffling why Trump has been so willing to focus attention on the dossier. If it is totally false, then why be so bothered by it and inadvertently educate even more people to its salacious accusations? I have concluded that there must be some real truth to what Steele found, a reality by which Trump feels very threatened.

However, if this new theory on how the “pee tape” story really evolved is correct, it would also at least partly explain Trump’s strategy on the dossier. Obviously he wants to use it to (falsely) legally discredit Robert Mueller’s entire investigation. But it also seems that he is taking a page out of the old Bill Clinton playbook.

Clinton understood that when the majority of the truth is against you, pick something that your opponents are saying that you know to be false and focus on that allegation. Even if the falsehood is totally irrelevant, those who want to side with you will always be able to say, “See, they got this part wrong so nothing they say can be trusted.”

Ironically, as insane as it is, if the “pee tape” does really exist, I doubt it would do Trump much damage at this point. However, if it turns out that the “pee tape” is just an urban legend, it may actually help Trump escape from an otherwise rather damning set of facts, which create a possibly devastating narrative about what really happened here.