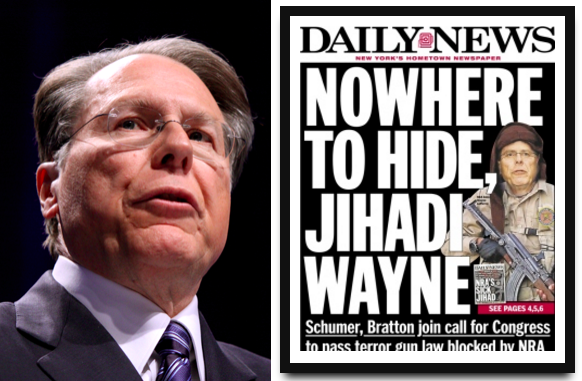 The New York Daily News has a long, contentious relationship with the NRA and has used its editorial license and power to become a journalistic advocate for gun control in recent years. After the deadly shooting in August of two journalists on live television, the Daily News ran a graphic and controversial cover of the event from the perspective of the camera lens in order to, “…convey the true scale of what happened.”

The focus of the NRA has been a strong one for the staff at the Daily News; just on Friday, the New York hometown newspaper accused NRA boss Wayne LaPierre of “ducking” the paper, reporting that for a third straight day LaPierre did not emerge from his home or office. The Daily News noted, “…the NRA was blocking a bill that would bar anyone on the FBI Terrorist Watch list from legally buying weapons in the United States.”

On Monday morning, the Daily News released its cover taking the war on LaPierre on step further: 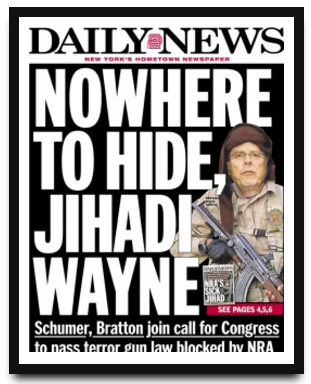 The newly proposed bill through Congress — known as H.R. 1076, ‘Denying Firearms and Explosives to Dangerous Terrorists Act of 2015’ — has drawn support from New Yorkers Senator Chuck Schumer and GOP Representative Peter King. The bipartisan effort puts the emphasis on the NRA, which is reportedly using its influence to block the legislation. Current New York City Police Commissioner Bill Bratton told NBC’s Meet The Press on Sunday, “If Congress really wants to do something… help us out with that terrorist watchlist, those thousands of people that can purchase firearms.”

[image via screengrab from The Daily News]