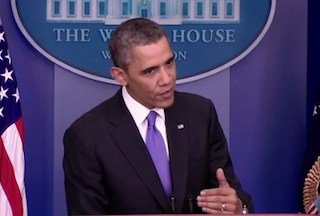 The New York Times editorial board issued a sharp rebuke Saturday to the way President Barack Obama handled the issues of privacy, security and the NSA at his year-end press conference Friday. Under the headline, “Mr. Obama’s Disappointing Response,” the editorial criticized the president for failing to take the right course from an “ethical, moral, constitutional and even political point of view.”

According to the Times, what Obama should have done was fully “embrace” the recommendations by his own presidential panel on reigning in the power of the NSA. “He could have started by suspending the constitutionally questionable (and evidently pointless) collection of data on every phone call and email that Americans make,” the editorial reads. “He did not do any of that.”

Given the fact that Obama has continued the defend the NSA’s surveillance policies, the Times writes that “he never intended to make the changes that his panel, many lawmakers and others, including this page, have advocated to correct the flaws in the government’s surveillance policy had they not been revealed by Edward Snowden’s leaks.” Instead, the paper calls on Congress to “rewrite the relevant passage in the Patriot Act that George W. Bush and then Mr. Obama claimed — in secret — as the justification for the data vacuuming.”

When Fox News’ Ed Henry asked Obama about the NSA program during Friday’s press conference, the president said, “There continues not to be evidence that the particular program had been abused in how it was used,” but added that the benefits of the program “may be outweighed” by the public’s fears over its abuse.

Watch that exchange below, via Fox News: