What cracks grown (and sometimes Pulitzer Prize-winning) women up more than hearing the real names of private parts? Not a damn thing.

Last night New York Times executive editor Bill Keller and managing editor Jill Abramson sat down with assistant managing editor Richard Berke in front of an audience at the Times Center for a “Behind the Scenes” interview. Apparently things got a little silly when the conversation turned to Abramson’s friendship with columnist Maureen Dowd. The Observer reports:

Jill Abramson first bonded with her self-described best friend at The Times, Maureen Dowd, when they covered the Clarence Thomas hearings (Abramson for The Journal, Dowd for The Times). When they heard the word “penis … uttered in the very stately Senate caucus room,” they looked at each other across from the press table and “We couldn’t believe this was happening!” A friendship was born. 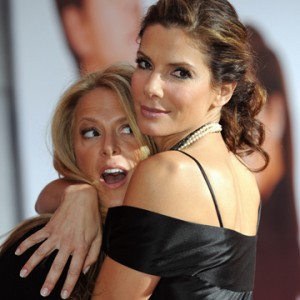 Bullock and Fletcher at the premiere of "The Proposal."

Never fear, the vagina seems to have the same power to bring 40-something women together through laughter. In director Anne Fletcher’s interview with actress Sandra Bullock in this month’s Glamour (a plug for their film The Proposal, in theaters now), Bullock admits that she wasn’t sold on doing the movie until she heard Fletcher say a certain dirty, dirty word:

SB: At first, I didn’t want to do it because they’d called it a “romantic comedy,” and I’d decided I was no longer doing those. Then I read the script and was pissed because I liked it so much. And then one of the first words out of your mouth was vagina. As soon as you opened your mouth, it was so aggravating because every element of the film seemed right.

It felt right, didn’t it, Sandy? So right, but sooo wrong.