Steinbrenner On Seinfeld: “What Are All These References To ‘George’ In The Script?” 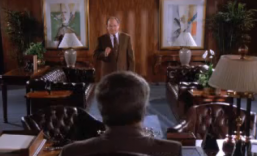 This is so fantastic and funny it sounds like it came directly out of a Seinfeld episode. In today’s column Maureen Dowd has the backstory on how George Steinbrenner came to be a character on Seinfeld….and how George Costanza almost lost his name.

Turns out Steinbrenner had never seen a Seinfeld episode and had turned down both an invite to appear on the show and to allow Jerry to have a Yankees’ pennant on his wall (which Seinfeld used anyway). “Why would I do that?” When Seinfeld returned a few years later with an additional request Steinbrenner responded “Didn’t they screw us last time?” Eventually he agreed to look at the script.

After reading less than a page, Steinbrenner angrily threw down the script. “I thought you said this doesn’t involve me?” he bellowed.

Sussman tried over and over to reassure him that this script contained no cameo for the owner.

“Then,” Steinbrenner demanded, “what are all of these references to ‘George’ in the script?”

Sussman was stunned but tried to explain: “ ‘George’ is George Costanza. He is a character on the show. He is a friend of Seinfeld’s, and he plays the role of one of your employees.”

Steinbrenner acted incredulous, intoning: “I thought you were smarter than that. Don’t you see? This is how they are trying to get at me. They have named their character after me.”

All attempts to tell him that the “George” character had been on the show since it started were brushed aside.

“Here’s what we do,” Steinbrenner declared. “Call your friend Jerry back and tell him he has Mr. Steinbrenner’s permission to use the Yankees uniform but on one condition: He changes the name of the Costanza character. In fact, have him name this character after you, David.”

Sussman conveyed the good news/bad news message to Seinfeld, who was understandably befuddled. The Boss declined to return Jerry’s phone calls to Tampa.

The following Friday, Steinbrenner called Sussman to discuss business, and then seemingly casually noted: “Oh, yes, that request from your friend Jerry Seinfeld. I watched that ‘Seinfeld’ show last night. It is a really funny show. And the George character is great. So you tell your friend Jerry he has my permission.”

And that’s how George and George coexisted happily ever after.

And that, as they say, was apparently the beginning of a beautiful friendship.