The graphics ran alongside Taylor’s testimony before the House Intelligence Committee in the first public impeachment hearings of President Donald Trump. Taylor, who was first appointed ambassador to Ukraine in 2006 by President George W. Bush, now serves in the Trump administration as acting ambassador to Ukraine (after the previous ambassador was recalled.)

He testified that the Trump administration — with help from Rudy Giuliani — pressured Ukraine into announcing investigations into his political rivals, namely Joe Biden’s family. Military aid from the U.S. to Ukraine and a meeting with Trump were both dependent on the investigations, Taylor testified.

During his testimony, Fox News ran a series of graphics outlining Taylor’s career and his role in the impeachment probe. Some were innocuous, others were… less so. They included one in which Fox uncritically cited Trump’s baseless attacks on Taylor: 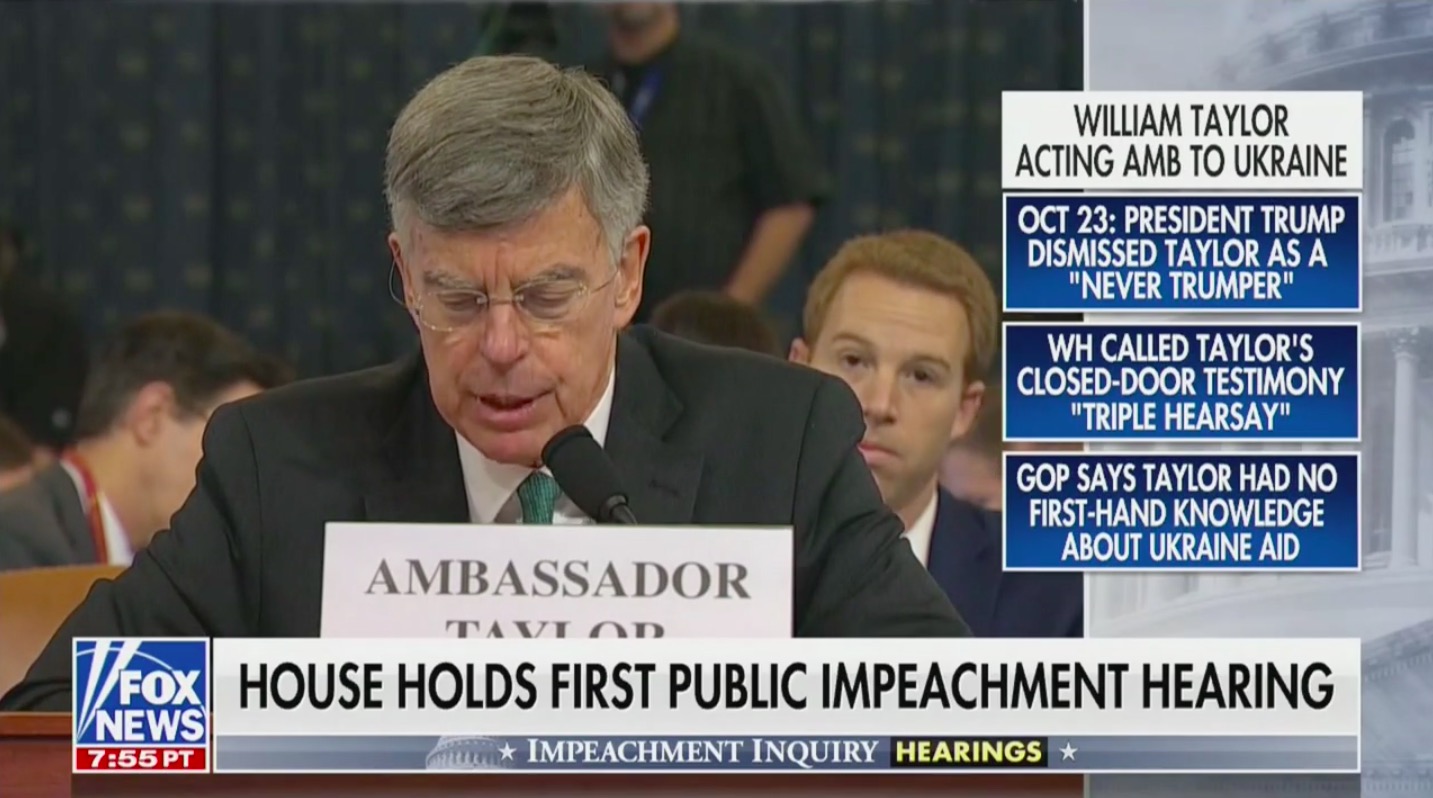 Trump lashed out at Taylor since the diplomat spoke to House investigators as part of the impeachment inquiry, calling him a “Never Trumper” and Republicans who oppose him “human scum.”

There is no evidence whatsoever that Taylor — who it should be noted still serves in the Trump administration — is a “Never Trumper.”

Here were the rest of Fox’s Taylor graphics, which included plenty of innocuous information about the diplomat: 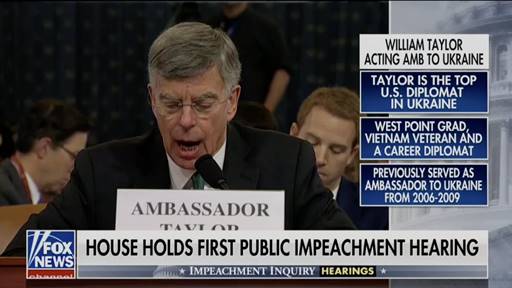 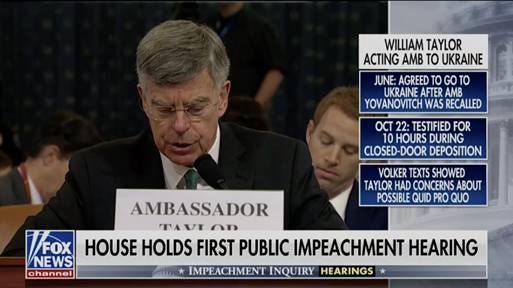 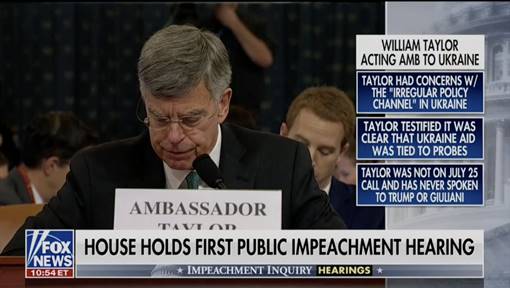 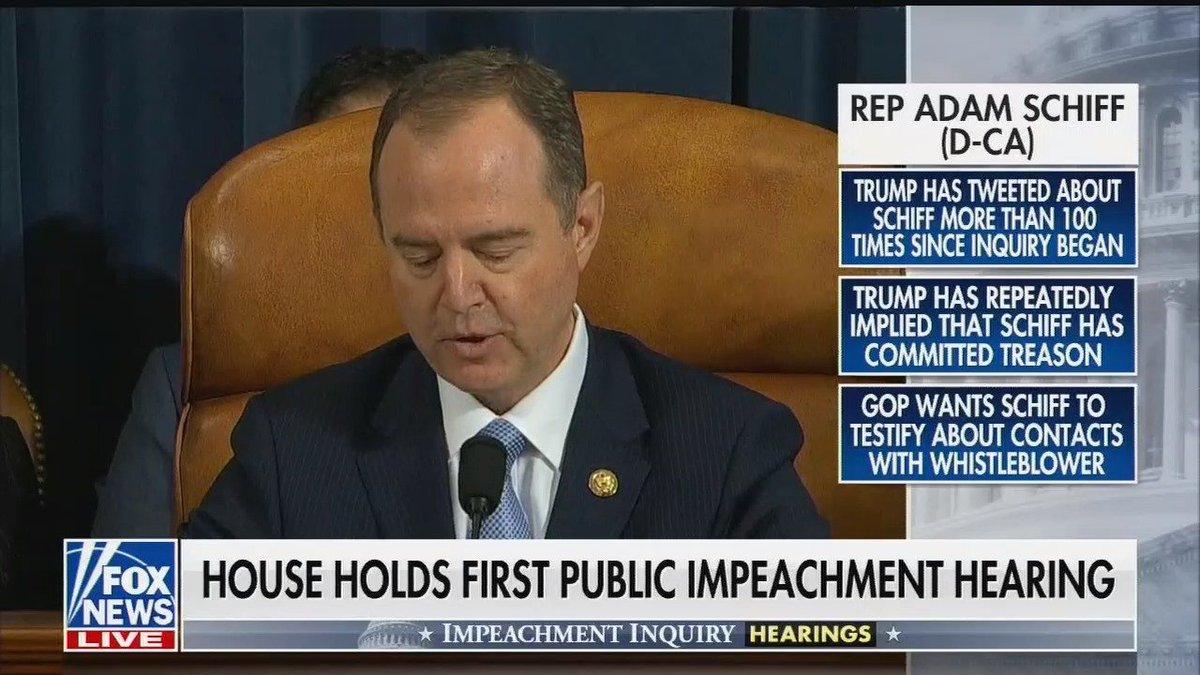 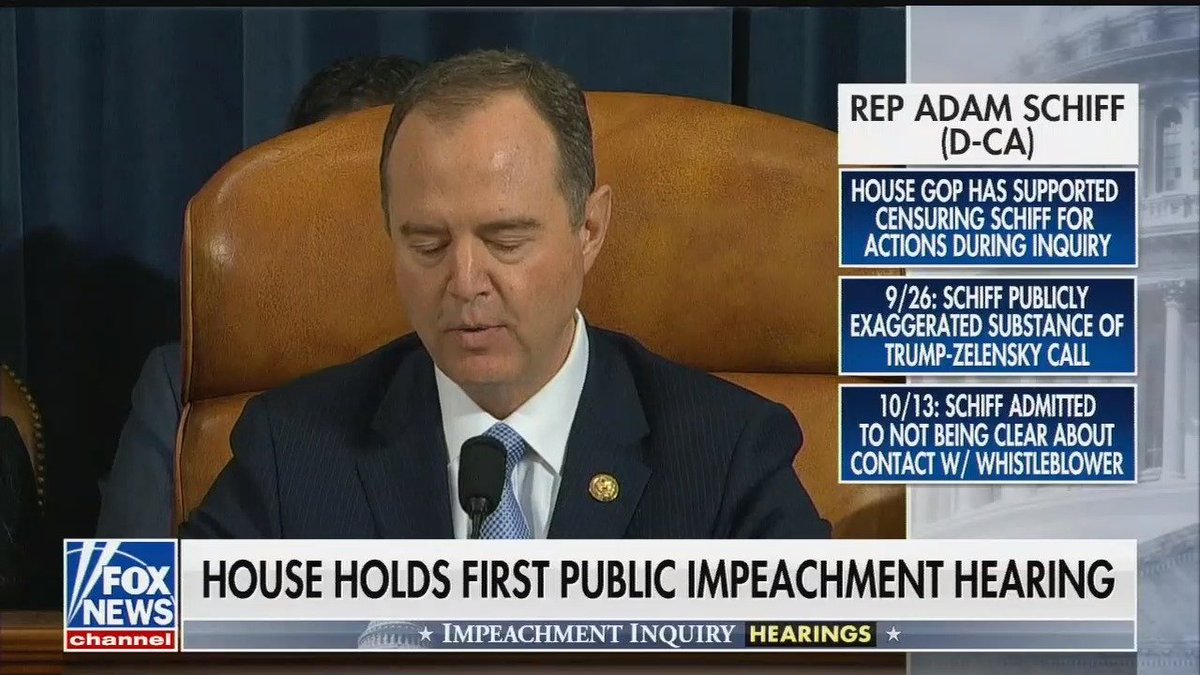 It’s a problem Fox has run into frequently during the Trump era: how to handle statements from the president of the United States when so many of them are completely false?

On FOX, btw, they are occasionally showing pop-up-video-esque boxes on the side, with factoids like the WH calling Taylor a Never Trumper & his testimony “triple hearsay.”

This is what Fox News thinks its viewers should know about Ambassador Taylor as he begins his testimony, in case you were wondering how they were going to introduce spin into live hearings. pic.twitter.com/XiH20HdvjI

you already know how this is gonna play out pic.twitter.com/Xv28fiaMJY

Compare Fox’s prominently featured bulletpoints challenging Schiff and Taylor’s credibility to its placement of the facts of the case at the bottom of the screen pic.twitter.com/m7IE28jRPy

While Fox News openly attacked Adam Schiff and Bill Taylor with their on-air graphics, check out how they treated Devin Nunes when he delivered his Deep State rant during his opening statementhttps://t.co/ATUhndNKBC pic.twitter.com/hnhzK2hYWg