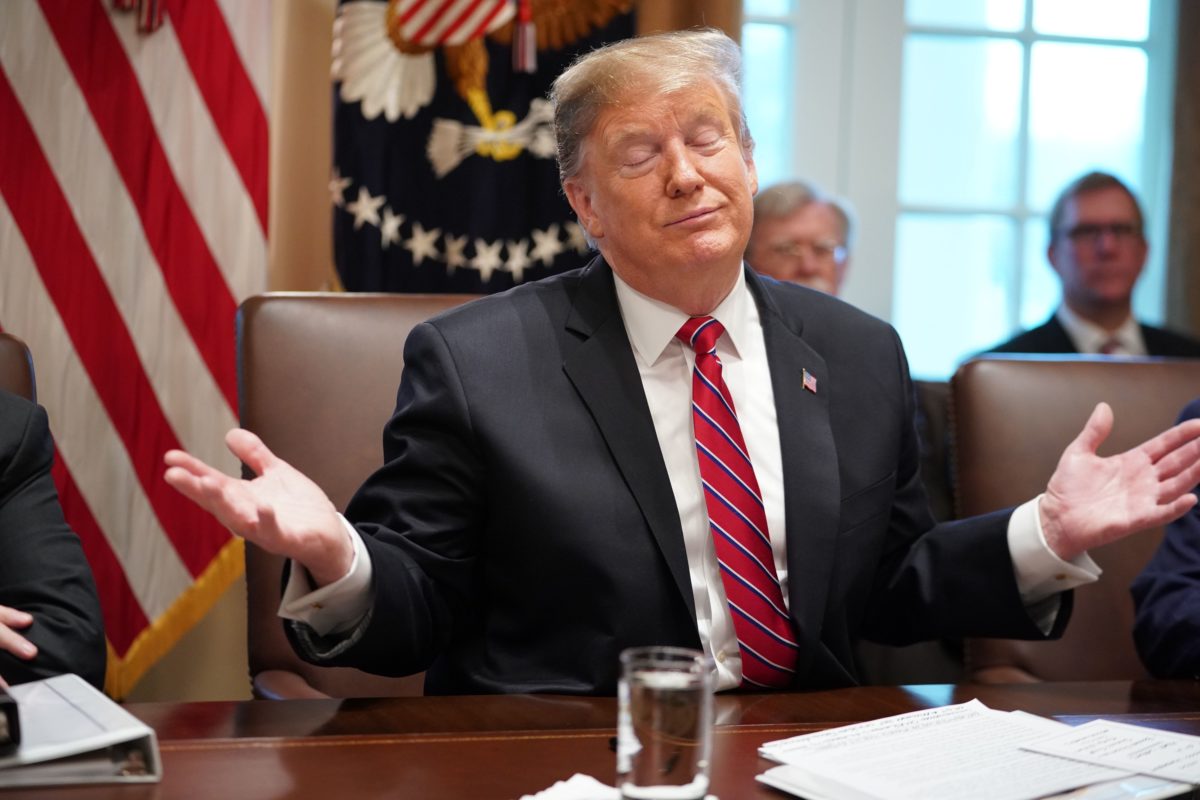 President Donald Trump’s White House “social media summit” on Thursday is slated to feature some of the biggest conspiracy theorists, clout chasers, and MAGA die-hards in conservative media. Or, as the Trump administration calls them, their “digital leaders.”

Doors open at 2 p.m. for the July 11 meeting, which is focused on “opportunities and challenges of today’s online environment,” namely, the purported censorship of right-wing views and figures on Silicon Valley-run websites like Twitter, YouTube, Facebook, and Google. Notably, none of those social media platforms are included in this social media summit.

It seems the president was inspired to hold the meeting last month after claiming the tech giants are all “against me,” an accusation the companies have denied extensively.

Trump’s troubles grasping the intricacies of social media are numerous. He has accused Twitter of trying to censor his voice by taking away his followers, but the company says the dip can be attributed to the removal of bot accounts, which contribute to the site’s massive spam and fake follower issues. He just reposted a fake Ronald Reagan quote tweeted at him by an account with seven followers — clearly some type of social media intervention is needed.

But perhaps not one that includes QAnon believers.

A guest list for the event has not been made public, but several of the summit’s invitees have taken to social media to boast about their White House summoning. Figures who have confirmed their attendance cover just about every corner of Trump’s collection of online misfits, from conspiracy theorists tied to white nationalists and Seth Rich truthers, to the blatant opportunists who rose to Twitter fame licking Trump’s boots.

Below is the definitive “digital leader” list featuring the five most infamous, clout hungry, outright absurd personalities Trump has coalesced for his anti-Silicon Valley tech meeting.

Garrison, a political cartoonist known for depicting Michelle Obama as a man and spreading far-right conspiracies about Seth Rich, QAnon, and George Soros, is certainly one of the more openly fringe and antisemitic figures on this list, but he gets an honorable mention spot since the White House was forced to disinvite him — or de-platform him, so to speak — after backlash. Politico reported on Wednesday that the invite was pulled when the outlet began asking administration officials like Jared Kushner, who is Jewish, about Garrison’s attendance. 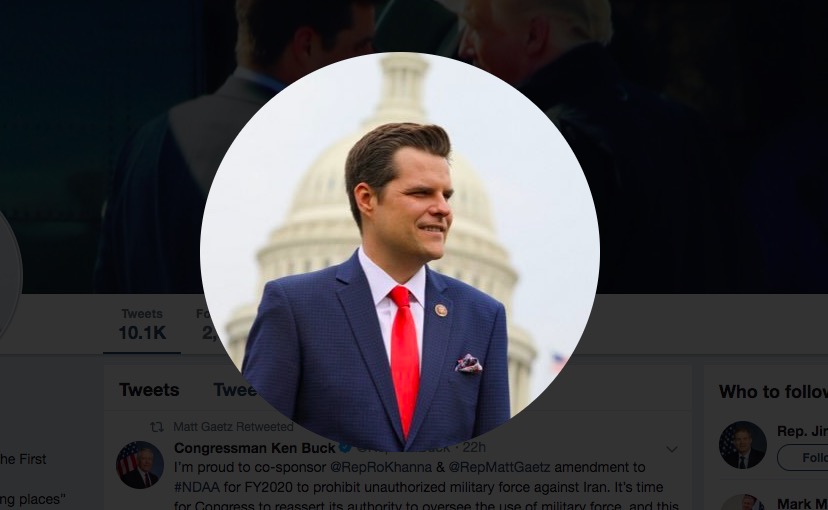 While other Republican lawmakers were invited, Gaetz certainly has the most crackpot history of the bunch. He has granted interviews to the conspiracy network Infowars and appears to have a bond with Alex Jones, who praised Gaetz as “one of the strongest, most focused, eloquent, on target” Republicans when he appeared on his show. For his State of the Union guest in 2018, Gaetz invited Holocaust denier Chuck Johnson and subsequently defended the fringe right troll as “not a Holocaust denier” and “not a white supremacist.”

Johnson’s actual comments on the Holocaust tell a different story. He once said: “I do not and never have believed the six million [killed] figure … I agree with David Cole about Auschwitz and the gas chambers not being real.” 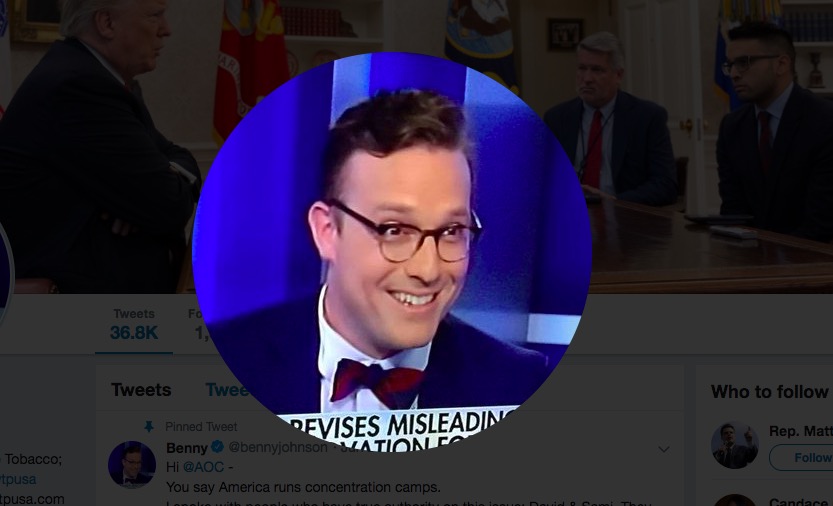 A Mediaite favorite, Benny Johnson is a right-wing digital media activist best known for being fired from BuzzFeed after he was caught plagiarizing content from Yahoo Answers. He now works for the far-right youth group Turning Point USA, where he pumps out aggressively normie memes that appear on the Facebook timelines of baby boomers via targeted advertising, even as the group claims to cater to high school and college students. Before that, Johnson did several stints with right-wing sites like the Daily Caller and Independent Journal Review, where he wrote articles — or did he? — exposing former first-daughter Malia Obama for “blowing smoke rings” on video and churned out false reports about former President Barack Obama supposedly secretly colluding with a Hawaii judge to overturn Trump’s Muslim travel ban. He was subsequently disciplined by IJR for that and eventually fired.

Johnson also earns cringe points for photoshopping years-old memes onto his White House invitation, including a photo of the late-Cincinnati Zoo gorilla Harambe. 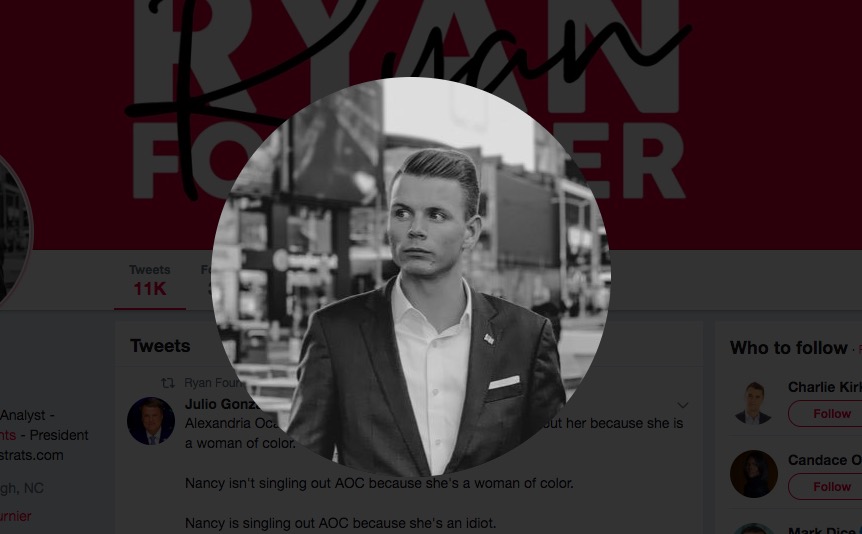 The term “clout chaser” is certainly overused these days, but the cliché exists for a reason — and Ryan Fournier, the co-chair, and founder of Students for Trump is a dictionary definition of it. Fournier rose to prominence among Twitter conservatives by mass-following, a standard attention-seeking tactic that involves following as many people as possible — hundreds of thousands at one point, in Fournier’s case — in the hopes that users will follow back. If they don’t follow back, mass followers will then repeatedly unfollow and refollow users until they follow back. A Twitter search of the terms “ryan+fournier+follow” brings up a litany of Fournier follow victims who just want to know why he keeps following them.

While this practice is certainly not unique to Fournier, he quite literally created an entire business out of it. Fournier’s digital media marketing company — the so-called, “X Strategies” — utilizes this mass follow-unfollow technique and a cheap tactic called “tweetdecking,” which involves operating a number of large, similarly themed Twitter accounts that aggressively share each other’s content to ensure max engagements. (Numerous large meme accounts have been banned by Twitter for profiting off the practice).

Fournier’s first endeavor, Students for Trump, got burned after they tried to align themselves with the 2016 Trump campaign but were instead met with cease and desist letters from the then-candidates team after they were caught lying about their supposed affiliations with Trump. The group was co-founded by John Lambert, a 23-year-old who recently caught a fed case after posing as a top New York lawyer on the Internet and skimming clients’ money, according to Politico Magazine. Lambert reportedly conjured up these ideas after watching the 2013 Martin Scorsese film Wolf of Wall Street.

It’s unclear why the Trump team pivoted from sending Fournier cease and desist letters to inviting him to the White House, but perhaps it’s due to TPUSA founder Charlie Kirk — who is also attending the White House summit — taking over Fournier’s Students for Trump at the beginning of July. The two are now co-chairs. 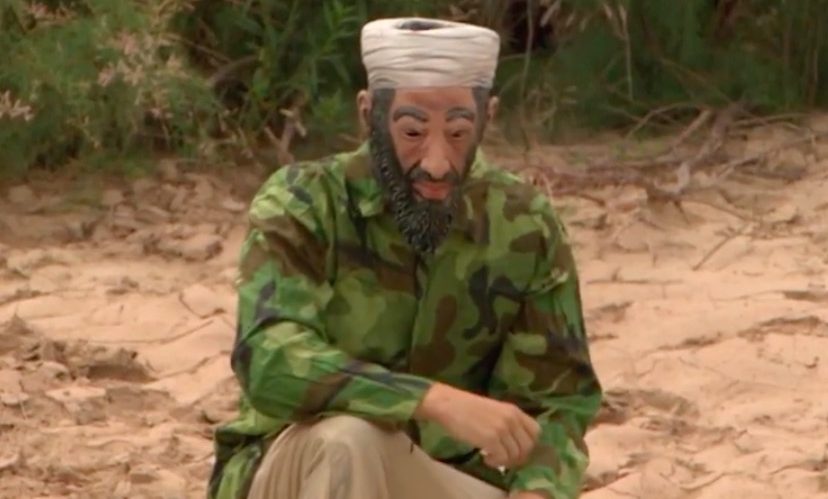 A self-proclaimed “citizen journalist,” James O’Keefe’s shtick involves going undercover in ridiculous costumes and taking superstitiously recorded videos of figures who work for or are connected to prominent organizations. He then selectively edits them to create his own narrative, regardless of the truth. O’Keefe’s most infamous attempt at this involved his hiring of a woman to pose as a fake rape victim to mislead the Washington Post during their reporting on Republican Senate candidate Roy Moore, who was credibly accused of sexually abusing minors.

O’Keefe’s other greatest hits include the time he pled guilty to a misdemeanor after deceiving a senator to access their office; the time he accidentally left a voicemail for George Soros’ Open Society Foundation in which he accidentally explained his undercover plot; and the time he tried to lure a CNN reporter onto his “pleasure palace” love boat in an attempt to seduce and secretly record her.

O’Keefe’s true passion, however, lies in cosplay. He has dressed up as everything from a member of al-Qaeda while illegally crossing the U.S.-Canada border, to a fur coat-wearing pimp in his takedown of the low-income housing agency ACORN, which resulted in O’Keefe settling a lawsuit with one of the ACORN workers he stung. He has also attended spy training sessions with Blackwater founder Erik Prince’s security firm and recently authored a James Bond-esque novel about himself, described as “a true-crime spy thriller.” 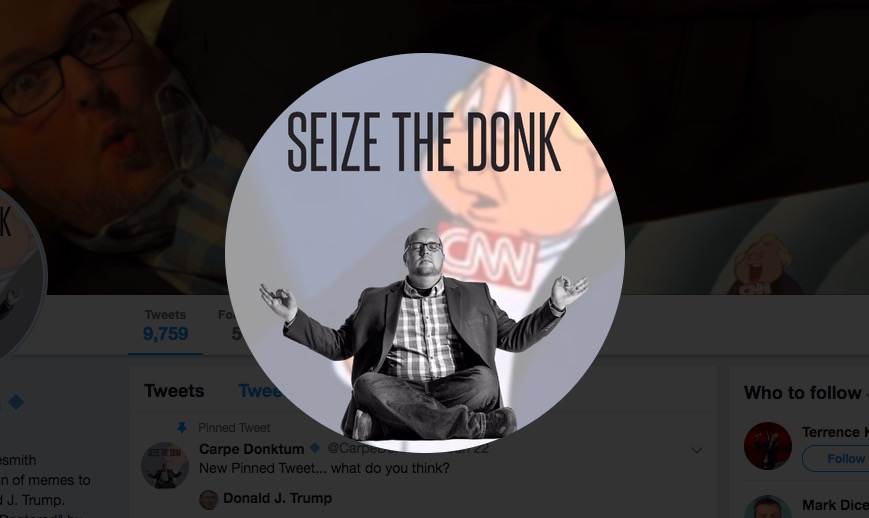 Despite being an anonymous Twitter user known for troll-ish videos, CarpeDonktum’s attendance at the digital media summit marks his second White House invitation. His first visit with Trump, who frequently shares CarpeDonktum’s videos on his Twitter, apparently went very well. The president reportedly said, “Where is the genius? I want to meet the genius” as the anonymous Twitter user walked into the Oval Office during the 4th of July.

Trump recently reposted CarpeDonktum’s content, including a fake Time magazine cover joking that he will be president forever and an awkwardly edited Joe Biden sorry-for-touching video, which the president rolled out amid the former vice president’s 2020 campaign launch.

In an interview with the New York Times, CarpeDonktum downplayed his sudden access to Trump: “Dan Scavino follows me on Twitter, but there’s no formal relationship there between me and the president.” He followed up the comment by wondering aloud: “If a political campaign wanted to hire me to do viral marketing stuff for them, that could be interesting.”

CarpeDonktum has also bragged about his relationship with Stefan Molyneux, whose stated opinions include “blacks are collectively less intelligent.”

CarpeDonktum is a man in his mid-30s who describes himself as an “Eternally Sarcastic Memesmith” and claims to live in “Maga City, Kekistan.” In reality, Donktum is a stay-at-home dad who lives in the midwest, which is the reason why he deserves the top spot of White House invitees: Only under a Trump presidency could a Kansas man literally meme himself into the White House.