Trump’s Decision to Host G-7 at His Own Doral Resort Met With Mockery, Outrage on Twitter 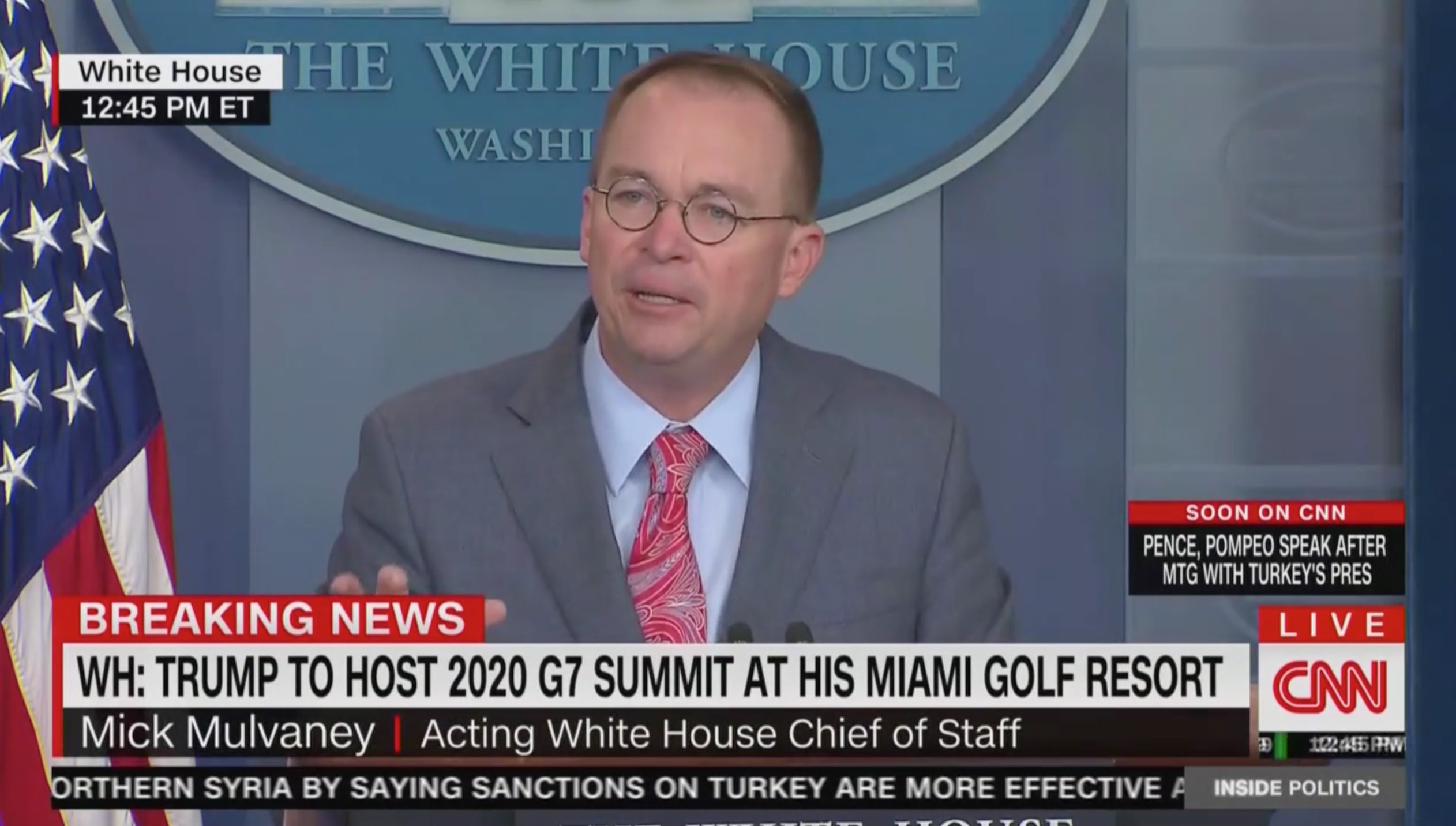 President Donald Trump’s acting chief of staff Mick Mulvaney made a stunning announcement in a press briefing on Thursday: that the next G-7 will be hosted at the president’s own Doral resort in Miami.

Mulvaney revealed that when the administration was putting together potential sites for next year’s summit, Trump proposed his resort.

Doral is “by far and away the best physical facility for this meeting,” Mulvaney told reporters, quoting an official who told him: “It’s almost like they built this facility to host this type of event.”

Reporters interrogated Mulvaney about the decision, pointing out it’s a massive conflict of interest and questioning why a resort in Miami is the best choice for a meeting with worth leaders in JUNE.

Twitter was equally unsparing, and the reactions ranged from mockery to outrage at the audaciousness of the corruption:

Holding the G-7 at a Trump property is one of the most foolish, unseemly things the WH could do. The President enjoys waiving red flags in front of bulls, but this fight isn’t worth it.

Q in briefing room: How does the president continue to attack the Bidens for a conflict of interest when he is hosting the G7 at his private club?

Reporters in briefing room not easily accepting Mulvaney answers on this, in first time any administration official has answered extensive q’s on Trump conflicts in some time. https://t.co/eeljsrm6x5

A great question. Its hard to even think of a more blatant example of the President using his office to make money for himself and his family. https://t.co/73F3SBX5A4

What a crew running the ol’ swamp these days. https://t.co/iMRC5wUto3

Trump put out the fire of his impeachment inquiry by setting a fire in Syria. Now he’s putting out Syria by awarding himself a massive, taxpayer-funded event on one of his properties. Does he know how to put out fires?

Coinicidentally, the single best facility in the United States for G7 is owned by the president https://t.co/4IPnV3xQ9Z

This is what this guy, one of the most prominent tea partiers in Congress for years, is now reduced to. If he had a shred of dignity he’d resign. https://t.co/6YNdP6OTzl

Doral is “the best place” for the G7, just like Trump’s appointees — a collection of criminals and incompetents — are all “the best people” https://t.co/GQgcnhKL0R

BREAKING: President @realDonaldTrump has awarded the massive G-7 Summit of world leaders to himself.

A bedrock promise of Trump’s presidency — that he would not use his public power to benefit his private company — explodes.https://t.co/c2LNkzJIOZ

The new site of the G-7 Summit — @realdonaldtrump‘s own Doral golf club — has a history of health-code violations, including “live, small flying insects” in the kitchen a few years ago.https://t.co/5pcb08SvqU

The summit will be held in June, when Miami is hot and Doral is usually empty.
In 2017, only 38% of Doral’s rooms were occupied in June. Only August (31%) was slower.

Now — b/c @realdonaldtrump has awarded the summit to himself — it will be full. https://t.co/p2JPBcpRbl

What gets me isn’t so much the audaciousness of the corruption as its sheer pettiness https://t.co/o61TsYv3JD

Clearly they conducted a careful review and found that the Doral was the best Trump property at which to hold this event. https://t.co/MUNczfxCTk

What conflict? What Emoluments clause violation? Nothing to see here.

Trump’s Doral golf course has been having trouble filling its rooms since he became president.

Mick Mulvaney said this just now of Trump: “He’s not making money off of this.”

In the middle of an impeachment inquiry that includes an emoluments investigation, President Trump’s acting chief of staff announces President Trump has chosen President Trump’s personal resort to ingest huge sums of public money by hosting the G-7 summit https://t.co/RGC4lwU7Wb

Mulvaney concedes that Trump was the person who suggested Doral as a site. “That’s not the craziest idea,” Mulvaney says he responded.

Lolol ok show us the books then https://t.co/h51Oa2VUns

It’s striking that, as he faces intensifying legal and political jeopardy, and with more of the public favoring impeachment, President Trump is doing more — not fewer — things likely to invite criticism, disapproval, and investigation. https://t.co/Q95r6Mz4OY