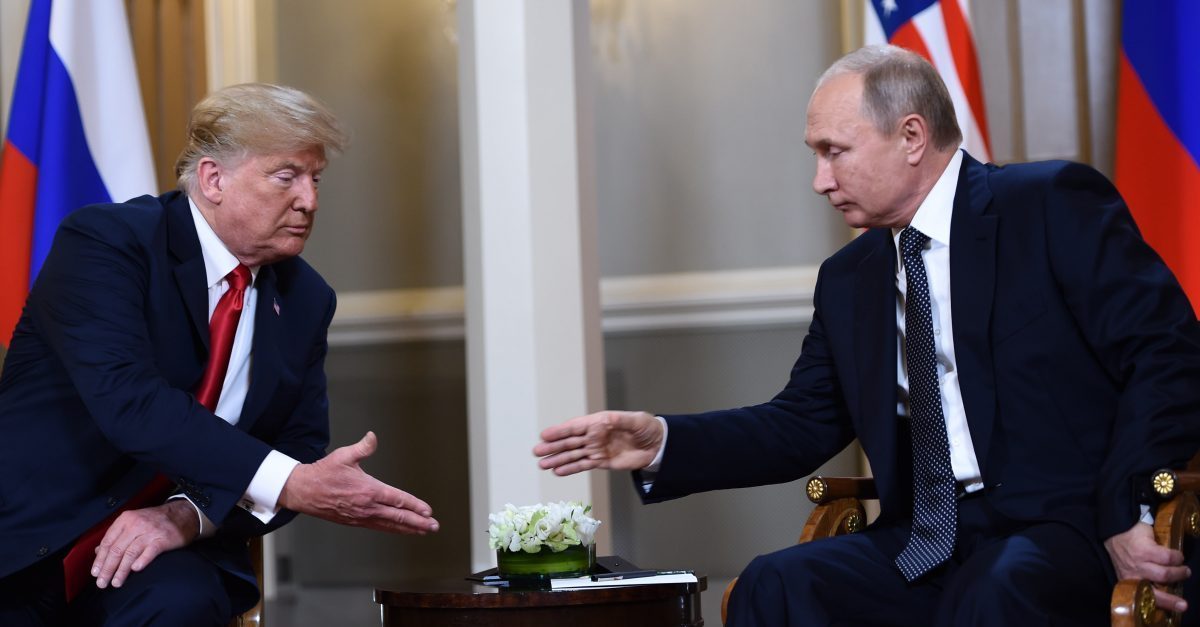 “Russia, Russia, Russia! That’s all you heard at the beginning of this Witch Hunt Hoax,” Trump wrote in a signature weekday morning Twitter rant. “And now Russia has disappeared because I had nothing to do with Russia helping me to get elected. It was a crime that didn’t exist.”

“So now the Dems and their partner, the Fake News Media say he fought back against this phony crime that didn’t exist, this horrendous false acquisition, and he shouldn’t fight back, he should just sit back and take it,” he added. “Could this be Obstruction? No, Mueller didn’t find Obstruction either. Presidential Harassment!”

Journalists were quick to point out the tweet is the first time Trump has publicly admitted the Kremlin’s election tampering assisted him in winning the race.

Check out a few of the best media reactions below:

During the campaign, he called on Russia to hack HRC.

His campaign secretly met w/ a Russian emissary as part of a covert Kremlin effort to help Trump.

He consistently claimed Russia was not intervening in the election.

Progress: Trump seems to acknowledge the fact of “Russia helping me to get elected.” https://t.co/i8qD0XWiws

Particularly now that Trump has finally acknowledged that Russia helped him get elected… what say the Republicans? https://t.co/hl1Rte9hKZ

That’s interesting, given that he also says the investigation was illegitimate.

Trump admits an attack on our political system happened, while saying the investigation to get to the bottom of it should have never taken place. https://t.co/bojJlgcUMJ

Even as he denies wrongdoing, Trump acknowledges that Russia aided his campaign: “I had nothing to do with Russia helping me to get elected.”

1) Intentionally or not, Trump seems to accept here that Russia helped him get elected
2) He probably intended to write “horrendous false inquisition,” not “horrendous false acquisition” https://t.co/V5vQvUzGG8

In which the president tweets: “I had nothing to do with Russia helping me to get elected.” Wow. https://t.co/domBtN4pIn

Not sure I’ve seen him acknowledge this before: “Russia helping me to get elected.” https://t.co/ixw8iWYvay

I love this. Trump tweets an acknowledgement that the Kremlin is partially responsible for his victory. He deletes the tweet. We all assume it’s because he realized his admission was a disastrous mistake. But instead, it was just to correct yet another idiotic typo. https://t.co/rrRitVC3P1