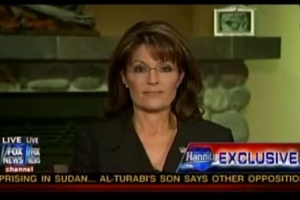 Sarah Palin may be known as “Mama Grizzly,” a political lightning rod, a published author, and a reality TV star, but tonight on Hannity she was a woman scorned. Pupils shaking and voice struggling to remain steadfast, the former Alaska governor gave defending herself post-Tucson (and post-controversial video response) to Sean Hannity the old college try, but at some point it was hard to remember whether it was Palin or Rep. Gabrielle Giffords who took bullets two weeks ago.

In contrast to the more serene Palin that addressed the nation in her online video earlier this week, the Palin that met Sean Hannity tonight appeared flustered and personally injured. While she insisted repeatedly that “my defense wasn’t self-defense,” she continually noted the threats against her and her family, defended her words personally, and ended her last segment, defiantly, “I’m not going to sit down; I’m not going to shut up.” Even when discussing deranged killer Jared Loughner, she described him as “left-leaning” (Loughner’s only political views, other than loving Mein Kampf and The Communist Manifesto, appear to be anti-grammar), and, catering to her fans, repeatedly mentioned Providence and quoted the Bible, and made a cringe-worthy attempt at tying in Martin Luther King, Jr. Day to her own plight. She went through a timeline of the Tucson murder as experienced by the Palin household, and, in defense of her use of the phrase “blood libel,”noted that others in the media had used it, too. Hannity, to his credit, pushed her on this point, but she held on to that defense.

Aside from this slightly unsafe political exchange, Hannity did his best to match the gravity of the open wound Palin was bearing on national television with his description of events– those events being the attacks on Palin, not the attack on Giffords. He notably mentioned his Google findings several times (turns out people on the internet criticized Palin) and gives her ample time to describe the scene from her perspective without interruption.

Palin’s course of action during this interview was a perfect strategy from the perspective of a Fox News contributor— she sold her story, played the victim, and equated her suffering with that of the people she claims to represent (Hannity viewers among them). For the rest of America, however– especially swing voters– wallowing in self-pity when six people are dead and a Congresswoman is in the hospital cannot be expected to go over well. Her task tonight, should she be interested in the presidency, was to prove that in times of crisis she could keep her cool and address the situation while looking beyond herself and not getting in the way of the tragedy. Instead, she stood front and center before it, reminding Americans that she– and, vicariously, they– were the true victims of this massacre, not the people that were shot two Saturdays ago. As brilliant as her argument may be as a sales pitch for herself, it was far from presidential, and her enemies are not likely to resist the temptation of chewing on her political remains tomorrow morning.

Her first segment with Hannity via Fox News below [Watch the second and third segments, where Palin explains her use of “blood libel” and talks about death threats on her family, here]: