A Tale of Two Speeches: Sarah Palin and Barack Obama on the Tragedy in Tucson

The tragic events in Tucson this past weekend left the nation shaken, and sparked a divisive debate over the tone of our politics. On Wednesday, former Alaska Governor Sarah Palin released a video address on the mass shooting, many hours in advance of President Obama‘s speech at a memorial service in Tucson.

In a guest column, John Ziegler, radio host, Palin confidante, and the filmmaker behind Media Malpractice: How Obama Got Elected and Palin Was Targeted, offers his unique perspective on these two speeches, whose timing and subject matter guarantee comparison, if not beg it.

A Tale of Two Speeches by John Ziegler 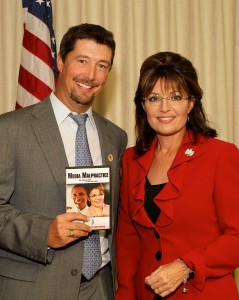 Minutes after comprehending the horror of Saturday’s horrendous shooting, I e-mailed Sarah and Todd Palin to make sure that they saw the same out of control media train barreling in their direction that I did. After over two years of studying anti-Palin media bias more carefully than anyone on the planet, it was obvious to me (and to them as well) that, facts-be-damned, this was setting up as a perfect storm for her enemies to make the kindergarten-level “argument” that Palin was somehow tied to the attacks. Unfortunately, even I underestimated how insane things would quickly get.

Thanks to the political dialogue having left the gravitational pull of the rational earth since the tragedy in Tucson, I have refrained from filling my normal role of defending Palin against unfair media attacks. This round was so obvious that there was simply no need for me to enter the fray.

That changed yesterday when Palin released a seven minute speech on her Facebook page on the same day (almost exactly twelve hours before) President Obama’s address to the memorial service in Arizona. Since Obama/Palin is the presidential match up which members of the news media spend their nights dreaming about, it will be far too enticing for them to refrain from comparing the two presentations, as if they were remotely similar. I am equally certain that such assessments will be based on numerous faulty premises.

I have no doubt that Obama will be declared by the media the winner here by knockout. (Wait, in this “post-Tucson” world are we still allowed to used such violent metaphors, or is okay in this case because Obama is one seen as dishing out the blows?) At times, this was clearly Obama at his best. For the most part he hit the right tone, which, thanks to the crowd’s constant and, at times, creepy cheering, was not easy. He was very eloquent, and even provided the proper level of human emotion. He performed the role we ask of our Presidents in times like these as if he was born (in Hawaii) to do so. In short, he was Reaganesque.

However, Reagan would never have given in to the temptation of pandering to his political base at such a supposedly solemn event, as Obama did last night. This would have been especially so when it came to providing presidential credibility to such an insidious “theory” for what caused the tragedy as the one the media/left has been peddling for the past several days. But even here Obama was utterly brilliant in his demagoguery.

Bringing back memories of his overly praised race speech of 2008, the President said “if, as has been discussed in recent days, their deaths help usher in more civility in our public discourse, let’s remember that it is not because a simple lack of civility caused this tragedy [– it did not –] but rather because only a more civil and honest public discourse can help us face up to our challenges as a nation, in a way that would make them proud.”

The genius of this line is that, technically, he really isn’t saying the shooting occurred because of our discourse (i.e. angry conservatives), but he gives a warm wink and a nod to everyone who does think that, all while invoking the memory of the dead in pursuit of a goal that no one would dare question.

This is the Obama who scares the daylights out of conservatives, because this is the man who knows exactly what the media will let him get away with (nearly anything), and how to use that to his maximum advantage. This is the Obama who, barring a major disaster, will likely get reelected.

Meanwhile, Sarah Palin’s video is “shockingly” being held to a completely different, and much higher, standard. The list of elements in the speech for which she is currently being criticized in the media (and even by some conservatives) is impossible to fully chronicle in this space.

They include: the fact she had the gall to use the ancient term “blood libel” which, unbeknownst to most Americans had been apparently legally copyrighted by the Jewish people hundreds of years ago (at least according to the “experts” the media selectively chose to interview), that she “lied” when referencing her ‘target” map and comparing it to others from the other side which were indeed similar, and mostly that she chose to defend herself at all, and that to do so was “unpresidential” and an attempt to steal the spotlight (really?).

It is this last allegation that is most maddening. I have a rule, whenever criticizing anyone, that I at least provide an alternative mode of behavior. So, in that vein, what exactly was she supposed to do?

She was essentially being accused of facilitating a mass murder! If she had said virtually nothing (as she did for four days), she would have been accused of hiding and not standing up for the truth. If she had gone on Fox News to combat the charges, she would have been seen as using the tragedy for ratings. And the notion that she was “unpresidential” because she took one rather vague shot (in a seven minute speech) at a media accusing her of murder is just flat out bizarre. In comparison to what the vast majority of humans would have said under similar circumstances, Palin’s speech was incredibly dignified, and in an era where a President can claim local police acted like stupid racists without a shred of evidence, was more than presidential.

But perhaps the most important difference between these two speeches came in the realm of how Obama and Palin view evil. In Obama’s world, evil things just happen and we may (he’s apparently not sure) all be to blame, while in Palin’s reality evil is done by bad people who must be held responsible for their actions, without threatening our freedoms.

Of course, once again, the media has misunderstood Sarah Palin. She was not trying to act like a president in exile. She was simply trying to tell the truth as she sees it, in a manner that was as noble as possible. Something which, if she was a liberal, I have no doubt she would have been seen has having done in a courageous and exemplary fashion. But thanks to the media, Sarah Palin lives by a different set of rules than anyone else (especially President Obama), and I have no doubt my view will be as scarce in print as the evidence that politics had anything to do with this tragedy.