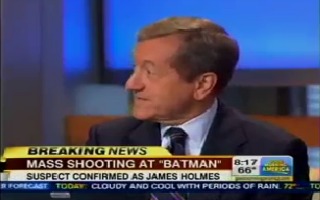 On ABC News’ Good Morning America George Stephanopoulos, interviewed Brian Ross who reported that there may be a link between the alleged Colorado shooter and the Tea Party.

At least 12 people were killed and more than 50 people were injured at a shooting in a movie theater in Colorado early Friday morning. During ABC News’ coverage of the shooting on Friday, Stephanopoulos noted that Ross had discovered that the alleged shooter, Jim Holmes, may be linked to the Tea Party.

A personal page on a Colorado Tea Party website shows a user named Jim Holmes highlighted an event with an expert who had discussed “global Islamic terrorism. ” This link between the shooter and the Tea Party that ABC News was referring to.

UPDATE: ABC News has issued a correction to their earlier report. The alleged shooter was not linked to the Colorado Tea Party:

An earlier ABC News broadcast report suggested that a Jim Holmes of a Colorado Tea Party organization might be the suspect, but that report was incorrect. Several other local residents with similar names were also contacted via social media by members of the public who mistook them for the suspect.