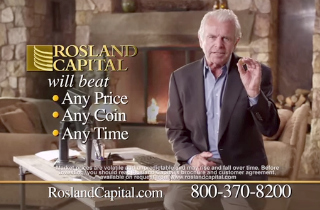 If you are a regular viewer of Fox News (as we here are at Mediaite), then you are intimately familiar with these four words: “Hi, I’m William Devane.”

In recent years, the actor — best known for his role in long-running soap opera Knots Landing along with a recent turn as president in 24 — has become a pitchman for Rosland Capital’s precious medals, sold as a hedge against economic collapse.

Seeing as the spots air all too frequently on Fox, one needn’t guess hard at whom they are aimed: The stereotypical Fox viewer, wary of the recession with fears that President Obama will plunge the country into anarchic collapse.

And yet, as NewsBusters discovered on Monday, Devane is actually a big Obama fan. In his own words, as quoted by USA Today:

“Obviously I’m a big fan of Obama, as a guy who’s smart and articulate and supposedly leading all of us. I say to myself, ‘what has got to be going on in the private side of this guy’s brain’ — the pressure, the racism that is thrown out — and he handles it with such dignity. There’s gotta be a private side to him where he goes, ‘Why do I have this job?’”

Probably not the best thing to say as a pitchman to Fox viewers who, based on your sales pitch, should see you as a humble soothsayer of economic collapse — not a collaborator with the enemy. In a way, it seems like the product is being sold almost antithetically to his stated beliefs.

Hey, while we are on the subject of Devane’s prolific Rosland Capital output, watch a classic below. I call this one “Plane”:

[Correction — 11:43 p.m.: A reader points out that the company Devane represents is actually Rosland Capital, not Goldline. This post has been corrected.]