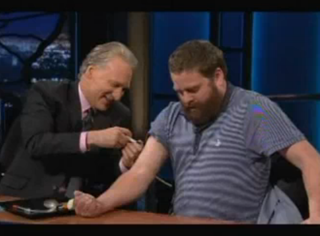 The last time Zach Galifianakis visited Bill Maher, the two bonded over their liberal approach to drug laws and, well, their liberal approach to drug usage. But when the last outrageous antic done on live air was to smoke “marijuana,” how do you outdo yourself this time? Luckily, Maher had a heroin kit handy, which Galifianakis was more than happy to use. He didn’t talk all that much after that.

Galifianakis was on Real Time last night to promote his new movie, though he appreciated the irony since it comes out next week, and today is the last day of the history of the world. With that in mind, heroin probably didn’t seem like such a bad idea, and Maher, who had a needle ready with “heroin” “like the cooking shows,” gladly shot him up. And that was only the beginning of the panel. Acting “high” after the “heroin,” Galifianakis was a bit slow on the uptake with several questions thrown at him, including “would you work with Arnold Schwarzenegger?” (“As his maid?” Galifianakis replied), and “what do you think about when you masturbate?” He was mostly quiet for the rest of the segment, which was a crash course in sex scandals beginning with Schwarzenegger’s and ending on the pedophilia scandals in the Catholic church.

Maher acknowledged that, as bad as Schwarzenegger’s case was, “the French are more rapey than we are,” though he attributed the Dominique Strauss-Kahn scandal to some misused Cialis (some on the panel were even more flexible than that– MSNBC’s Dylan Ratigan argued that “when there’s a woman in the room, a man wants to have sex with her,” which made co-panelist Gillian Tett a bit uneasy). Where the panel seemed to have no leniency whatsoever was with the Catholic Church for its investigative findings showing that the 1960s were mostly responsible for their scandals– panelist Reza Aslan pointed out that this happened to be the era of Vatican II, which Pope Benedict XVI had never been too great a fan of.