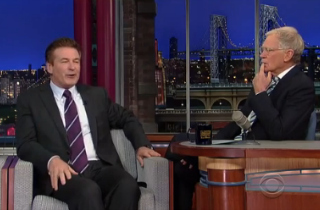 Roughly 700,000 Americans have signed on to the petitions to secede thus far. The movement has been most popular in southern states like Alabama, Florida, Georgia, Louisiana, North Carolina, Tennessee, and Texas.

“It’s so strange because I had many of those states on a list of states I would like to secede from the United States,” joked Baldwin. “And the people that are leading that movement, it’s amazing, because we actually agree on something for the first time. That secession.”

“And what will they do? I’d kind of like to see this,” Letterman asked.

“What would they call it? The United Flakes of America?” Baldwin mocked. “The United States of Caucasia?”

Letterman then noted that secession is highly unlikely because of constitutional provisions that require the approval of every state in the Union in order for one state to secede.

Baldwin mocked the relatively small size of the movement: “They say that it’s 750,000 people out of 300 million people, gosh darn it, that’s one quarter of one percent of the people of this country want to secede. It’s trending. Hashtag secession. It’s all over Twitter.”

Letterman agreed: “You do the math, and it’s not that big a deal.”