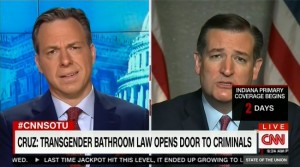 As the controversy over transgender bathroom laws and policies continues to roil, Republican presidential candidate Ted Cruz continues to exploit the issue by telling the hateful and dangerous lie that inclusion means “letting grown men in the bathroom with little girls” to prey on them. What you almost never see is a journalist, or anyone, for that matter, challenge him to his face on this point. On Sunday’s edition of CNN’s State of the Union, Jake Tapper did just that, in what should be a model for all journalists who encounter Cruz and his bigoted lies. It wasn’t perfect, but it was a great start:

CRUZ: And, frankly, the concern is not the Caitlyn Jenners of the world. But if the law is such that any man, if he feels like it, can go in a women’s restroom, and you can’t ask him to leave, that opens the door for predators. You know, I spent a lot of years in law enforcement dealing with child predators who are sick individuals. And that doesn’t mean that that is the people who are transgendered. But there are predators in the world. And just saying that, if you’re a man, you can go in the girl’s restroom if you feel like it open the door — opens the doors for criminals. And the important point…

CRUZ: Of course it is.

CRUZ: Of course it is.

TAPPER: But you or I don’t identify as female. You and I aren’t transgender. We — this law wouldn’t be about you and me going to a woman’s room.

CRUZ: But the law doesn’t specify transgender. It’s whatever you feel like at the given moment. And, in fact, that was Donald’s position.

Unfortunately, Tapper didn’t have a copy of the Charlotte city ordinance handy, or a legal glossary, so he wasn’t able to continue to challenge Cruz, but it was a good start. What Cruz and his ilk are trying to sell is that they’re not trying to discriminate against real trans-people, they’re just forced to discriminate against them in order to protect from the fake trans-people who even Fox News says don’t actually exist. This is a bit like defending racial profiling by saying you’re actually looking to catch people wearing blackface to commit crimes. It’s idiotic, and what it really does is foster violence and hostility toward trans and LGBTQ people.

The Charlotte ordinance was designed to prevent discrimination against people on the basis of “race, color, religion, sex, marital status, familial status, sexual orientation, gender identity, gender expression, or national origin,” and in this particular case, it is “gender expression” upon which Cruz rests his assertion that “It’s whatever you feel like at the given moment,” which is not what gender expression means, but don’t be fooled. Cruz would not suddenly drop his opposition to non-discrimination laws if they amended that language, because the real premise here is that any deviation from birth gender is something that can be faked in order to get into the bathroom with Ted Cruz’s daughters.

But it would be helpful for journalists to brush up on it anyway, because gender identity and gender expression actually aren’t things you can just make up on the spot, there are clear legal definitions. Essentially, the Charlotte ordinance says you get to use the bathroom that corresponds with your gender identity, but it includes “gender expression” so that, for example, people can’t kick you out of a ladies’ room because some security guard thinks you look like a dude.

Here’s hoping that every journalist who reads Mediaite (which is all of them) takes the time to become informed about this, and then displays the same sort of tenacity with this issue as they do with things like whether or not Ted Cruz will support Donald Trump when he wins the Republican nomination.