An Angry Sarah Palin Responds To Dick Cheney: He Is Buying Into ‘Lamestream Media’ Spin
video

An Angry Sarah Palin Responds To Dick Cheney: He Is Buying Into ‘Lamestream Media’ Spin 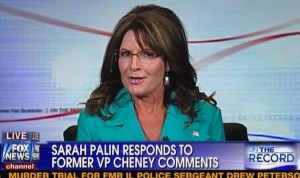 On Fox News’ On The Record, Sarah Palin responded to Dick Cheney saying in an interview earlier this week that she should not have been chosen as John McCain‘s running mate in 2008. Palin said that Cheney made a rare “misfire,” and suspected that he had bought into the “lamestream media” spin on the election.

Greta Van Susteren noted that Liz Cheney made it clear that she disagrees with her father on Palin, before asking the former Alaska governor what she thought of Cheney’s comments. Palin admitted she was not happy with the former vice president’s thoughts on her qualifications.

“Well, seeing as how Dick — excuse me, Vice President Cheney — never misfires, then evidently he’s quite convinced that what he had evidently read about me by the lamestream media, having been written, what I believe is a false narrative over the last four years, evidently Dick Cheney believed that stuff and that’s a shame. So he characterized me as being a mistake.”

Palin said that she felt “honored” to accept the nomination to be McCain’s running mate, and that the true mistake would have been if she had decided to “hunker… down,” stay in Alaska, and serve out the rest of her term as governor.

Van Susteren noted that Cheney wrote in his memoir that Condoleezza Rice cried on more than one occasion, wondering why he would want to say things like that to prominent women like her and Palin. Palin said that Cheney just misfired, just as she believed the GOP establishment misfired when other Republicans made similar statements about her 2008 candidacy.