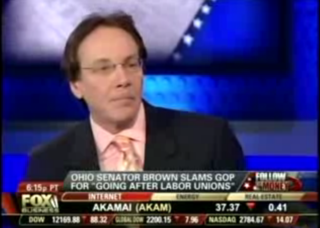 Glenn Beck has been on Fox News now for a good two years– he’s heard it all. But it’s rare to find any profound level of disapproval among his Fox family. On last night’s Follow the Money on Fox Business, colleague Alan Colmes repeatedly denounced Beck’s use of Nazi references and apocalyptic rhetoric, shouting over a half-amused, half-disappointed panel that he was “sick and tired” of what he perceived to be the right wing’s double-standard on violent rhetoric.

Amid a discussion about the union chaos in Wisconsin, Colmes responded to panelist Dana Perino‘s denouncement of a Nazi reference by Sen. Sherrod Brown by pointing out a number of people on the right that have done the same and been met with silence by this side of the aisle. “I don’t want any lectures from the right about rhetoric,” he began tersely, highlighting offensive comments from Rep. Louie Gohmert, Sen. Jim DeMint, and, yes, his own colleague. He asked Perino whether she was equally outraged “when Glenn Beck day after day invokes Hitler,” a comment greeted by the squawking of every other pundit on the panel. This time, however, Colmes wouldn’t let the issue settle and wouldn’t take evidence of those on the left making similar references as justification. Host Eric Bolling finally cut to break, apparently in the hopes of settling everyone down, to which Colmes muttered “thanks for mic-ing me up” somewhat irreverently.

But of course Colmes didn’t let the matter die there. Bolling changed the subject after the break, turning to Jesse Jackson‘s call for revolution. Once again, Colmes cited a double standard, asking what the difference was between Jackson’s revolution comments and “when Glenn Beck says ‘the revolution is now*,’ when he goes on about revolution.” The panel once again erupts in dissent. “Who brought up Glenn Beck?” a disembodied voice sounds amidst the tumult, as Bolling finally regains control and claims Jackson’s rhetoric was the type that brought about such things as the Tucson shootings earlier this year. Once again Colmes persists. Yes, the segment ends with Eric Bolling taking out a baseball bat.

While it is fascinating to watch Beck take such criticism from one of his colleagues, it is also not unprecedented– a network family that employs figures like Beck and Sarah Palin alongside people like Colmes or Juan Williams needs to leave space for dissent. If anything, it legitimizes the “Fair and Balanced” slogan significantly to allow the dissent. Perhaps the most surprising note in this segment is to watch Colmes, typically the least frazzled in any given political panel, go to bat so strongly for one of his main points.

*To be fair, Beck only uses the term “revolution” in pointing out that the left is trying to engender one, not in any attempt to foment a revolution of his own.

The segment via Fox Business Network below: