Anchor’s Epic Rant Against Angry Viewers: ‘No Show Is as Important as Someone’s Life’
video

Anchor’s Epic Rant Against Angry Viewers: ‘No Show Is as Important as Someone’s Life’ 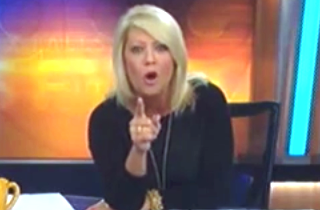 You know what sucks? Watching the finale of your favorite TV show, only for it to get interrupted. You know what sucks more? Not being prepared for some seriously bad weather. And one South Dakota news anchor had some choice words Monday for angry viewers who didn’t exactly have their priorities straight. Local viewers were glued to ABC affiliate KSFY, watching the season finale of the hit show Once Upon a Time when the station broke into the regularly scheduled programming for breaking news about a tornado nearby.

At least one viewer credited KSFY for alerting her to the tornado, so she could tell her family, but not everyone was so appreciative. The network got quite a lot of phone and online complaints for cutting into the Once Upon a Time finale.

Well, KSFY anchor Nancy Naeve addressed the complaints on Monday’s newscast, and unloaded on everyone who thought their show was more important than notifying people of an emergency.

“No show is as important as someone’s life. You aren’t gonna go on the air if it’s not important. and people just berated our station for him being on the air. But I tell you what, if it was your home and your neighbors, you would feel differently, so please, please don’t do that. That’s not nice.”

So if some storm happens in your area around the time Modern Family‘s finale airs, take a deep breath and calm the hell down first.

Watch the video below, via KSFY: