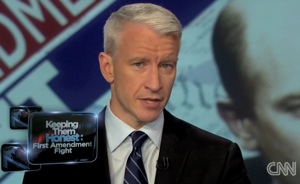 During a feisty debate against her Democratic foe Christ Coons, Deleware’s GOP senatorial candidate Christine O’Donnell made some news when she questioned the separation of church and state and the U.S. Constitution, asking “where in the Constitution is the separation of church and state?” This was immediately exemplified by her political opponents as an foolish gaffe, ignoring the fact that the exact phrase does not appear anywhere in the Constitution. Last night Anderson Cooper addressed this, and in an uncharacteristically harsh way, chided the candidate for getting a lot of her facts wrong.

After playing the clip, Cooper took issue not with the facts of O’Donnell’s comments, giving her the benefit of the doubt in what she meant:

Now, perhaps Ms. O’Donnell was simply trying to say the literal phrase separation of church and phrase is not in the first amendment. That’s true. Here’s a relevant passage. “Congress shall make no law respecting an establishment of religion or prohibiting the free exercise thereof.” The very first sentence, the very first amendment. The words “separation of church and state are not in there, yet the sentence itself makes it plain: the government can neither meddle with your faith nor set up an official faith of its own.” Article Six of the Constitution prohibited religious tests for holding public office and as coons pointed out, numerous Supreme Court decisions have fleshed out what the First and other amendments mean in practice, what she got right was the technicality.

But Mr. Cooper did not end there, using O’Donnell’s apparent lack of Constitutional knowledge to make a potentially more damning point that the Tea Party candidate is in fact, way out of her element, saying:

Oddly, it gets worse for Candidate O’Donnell from there.

Anderson Cooper has carved a niche for himself as a smart and informed Cable News host, but has, for the most part, avoided the sort of “opiniontainment” programming that one typically sees on MSNBC or Fox News. However, as the following segment reminds us, Mr. Cooper is at his best when he does not hold back. Perhaps this clip is a preview of a more full-throated AC360 in the months to come? Viewers can only hope.