Andrea Tantaros Asks Donald Trump: Is The Apprentice More Important Than The Country? 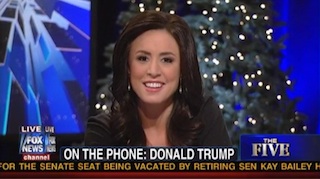 Things have been getting particularly chummy between the folks of The Five and Donald Trump lately. Throughout the past week, there have been mentions that Trump has been giving some of the hosts personal phone calls to discuss the show. Well, apparently, those have been going well because today they decided to have him call in live on air for a round of light hearted questions. Either Steve Doocy’s a poor conversationalist of Trump’s just sick of waking up early enough to call in to Fox and Friends.

Trump’s call actually makes him the first guest to ever appear on The Five unless you count a call in from Sean Hannity earlier in the run. Five Fanatics, feel free to use that trivia fact to impress your friends at parties. Then, after you’ve done that, get new friends because, seriously, that impressed them? What losers.

Anyway, the gang was fairly cordial to Trump (despite a part where half of them looked like they were holding in giggles as he claimed to still be unsure where President Obama was born). During Trump’s second of two segments on the air, someone asked if the Republican Party might have had better candidates that aren’t running and Eric Bolling quickly cut in to point out that they did and “he’s on the phone.” Even Bob Beckel was fairly complimentary. Although, it was slightly odd how he kept mentioning that it was because of angry calls from Trump’s lawyer only to then (perhaps too) quickly mention he was just kidding.

Perhaps the toughest the hosts got on Trump was after he spent a while listing the various problems with the country and then said he couldn’t run because he had to host The Apprentice. “So wait, wait, wait,” said Andrea Tantaros. “The Apprentice is more important than those issues you just laid out?” Trump countered that even Clint Eastwood was getting involved in a reality show (which, by the way and pardon my French, is the most depressing f**king news this year) and that he could always run as an independent after the show’s season ended.

“I don’t believe it,” said Tantaros with a smile.