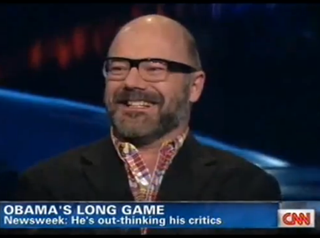 Andrew Sullivan‘s Newsweek story on President Obama angered plenty of conservatives, as the magazine retitled the piece “Why are Obama’s critics so dumb?” and Sullivan, a self-proclaimed conservative, stood up for the president. On tonight’s Anderson Cooper 360º, Sullivan defended his thesis that the President had governed well against Republican strategist Bay Buchanan.

Anderson Cooper opened the interview with the first order of business: whether the inflammatory cover was his idea. “No, I found out Monday morning,” he clarified, adding that “I make a pretty reasonable , I hope, fact-based argument” and that “you won’t find the word ‘dumb’ or ‘stupid’ in any of the text of the piece.”

Sullivan then explained his argument– that “from the beginning he was planning on 8 years rather than 4, and that is also due to the scale of what he inherited,” he said of the President. He also found it strange that conservatives saw the President as a “radical lefty.” “If 25 million unemployed or underemployed Americans is part of his master plan, then maybe Rush Limbaugh is right,” Buchanan replied, “maybe he is trying to destroy America.” She added that she would rather believe the President was “completely clueless” than that alternative.

RELATED: Megyn Kelly: Is Newsweek Obligated To Put An ‘Actual Journalist’ On Its Cover Instead Of Andrew Sullivan

“I haven’t seen anything Obama has done that has made that worse,” Sullivan replied, concluding that the President would likely “win handily” because of the way he was working, and that his idea of spending now “actually helps in the short term,” citing Italy as a country whose budget cuts did not help growth.