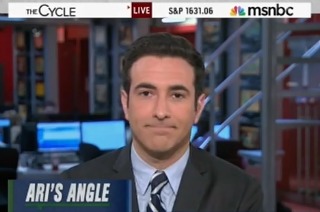 MSNBC host Ari Melber took aim at President Barack Obama, Supreme Court Chief Justice John Roberts, and the “surveillance industrial complex” in a scathing editorial segment on Wednesday’s The Cycle. He blasted the president for an “Orwellian” use of the word “transparent” to describe the decisions made in secret by the Foreign Intelligence Surveillance Act courts which serve as a check on the National Security Agency’s communications monitoring programs.

“The president says he welcomes a debate on this issue,” Melber said of Obama’s defense of the NSA’s sweeping data gathering programs in an interview with CBS News anchor Charlie Rose. “And that’s good, because many of his defenses were debatable.”

Melber hit Obama for conflating what the NSA’s telephonic monitoring programs target with the electronic communications monitoring program, PRISM, when he said that the FISA courts have overseen every federal request. He said that PRIMS nets 3 billion pieces of intelligence from computers in one month.

“Potentially 35 billion pieces in a year,” Melber said. “There aren’t 35 billion court orders for that.”

Later, Melber slammed Obama for saying the NSA’s process of obtaining intelligence is transparent because they go through the FISA courts.

“No,” Melber shot back. “You cannot invoke a secret court for transparency.”

“It’s not transparent. That’s why it meets in secret,” he continued.

Melber mocked the notion that the FISA courts were independent because they have almost never denied a request from the federal government to monitor a suspect. “I’d say that’s pretty rubber stampy,” Melber observed.

He linked this to the fact that Justice Roberts appoints every FISA judge. “This secret court now has one of the most monolithic, one party, right-wing benches in American history,” Melber declared. He said that changes can and should be made, but power-hungry politicians and profitable surveillance companies would oppose any changes to that system.