Barbara Walters Confesses: ‘We Thought’ Obama Would Be the ‘Next Messiah’
video

Barbara Walters Confesses: ‘We Thought’ Obama Would Be the ‘Next Messiah’ 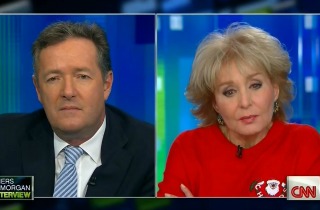 During a discussion with ABC’s Barbara Walters about her annual most interesting people list with CNN host Piers Morgan on Tuesday, Walters was probed about why President Barack Obama fell off that list. Walters confessed that he and the first lady were left off the list this year, not because he is omitted for cause but because she already interviewed the president this year. She added that Obama’s recent dip in popularity has shocked so many because “we thought” that he was “the next messiah.”

Walters told Morgan that she may not have interviewed the president twice this year, but she would be featuring the subjects of A&E’s hit program Duck Dynasty.

Morgan laughed at this assertion. “I cannot believe you are genuinely looking at me down that camera lens and saying you find a bunch of guys that hunt ducks more interesting than the President of the United States,” he said.

“I don’t want to go down in history as having said that,” Walters backtracked.

“Why is Obama facing so much opposition now?” Morgan asked. “Why is he struggling so much to really fulfill the great flame of ambition and excitement that he was elected on originally in 2009?”

“He made so many promises,” Walters recalled. “We thought that he was going to be – I shouldn’t say this at Christmastime, but – the next messiah. And the whole Obamacare, or whatever you want to call it — the Affordable Health Act — it just hasn’t worked for him, and he’s stumbled around on it, and people feel very disappointed because they expected more.”