Barbara Walters Flummoxes Defense Attorney Don West Over ‘Lessons’ Learned From Trial: ‘What Are They?’ 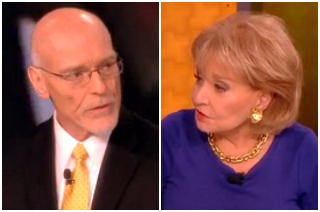 The View co-host Barbara Walters caught defense attorney Don West by surprise Monday morning, after he stated vaguely that there “have to be some lessons” from the George Zimmerman trial—trafficking in the same imprecise, boilerplate language many have used in hopes of evading controversy following Zimmerman’s acquittal—and she responded, “What are they?”

“What do you say to people who are protesting?” Walters had initially asked West. “There are people now who feel that the country is divided perhaps the way they were with the O.J. Simpson verdict.”

“I say to them, ‘Pay attention, and let’s use this as an opportunity to come together,'” West said. “There have to be some lessons from this.”

“What are they?” Walters asked.

West—who once upon a time opened a murder trial with a knock-knock joke—clearly did not expect this follow-up, nor did he seem to appreciate it. He paused for several seconds, huffed once, and slowly extracted an answer.

“The jury made their decision based on the evidence in the case,” West said. “And that’s not necessarily the basis of the opinions that people outside the case hold. We should maybe sort that out first, and use that as a way that we can all have a—a conversation that can mean something.”

The defense has made bold statements in the days since the verdict about the need for Zimmerman to rearm himself, and the media’s role in turning their client into a monster, so it was nice to see Walters demand what exactly they would mean now by “coming together” to learn “lessons.”

ABC News Chief Legal Affairs Anchor and Mediaite founder Dan Abrams, guest hosting in the absence of Elisabeth Hasselbeck, then asked the attorneys about what he called “least credible” aspect of Zimmerman’s story: the claim that Trayvon Martin was lurking in the bushes waiting to attack Zimmerman.

“Can you understand why that’s sort of hard to accept?” Abrams asked.

“Abosutely,” Mark O’Mara said. “I don’t think that he said it quite like that. This was the intersection of two people, neither one of which knew what the other was thinking or doing. George Zimmerman obviously looked at Trayvon Martin with a history of a lot of other burglaries in the neighborhood and said, ‘I call him suspicious,’ and did what he did based upon that premise. Trayvon Martin looked at George Zimmerman following him and said, ‘I don’t like this guy following me.'”

“But Zimmerman still says, when he’s asked, he says he came from over there, and he points to this area of the bushes, basically suggesting that Trayvon Martin jumped him,” Abrams rebutted.

“What he said was that he came form the darkness—because it was very dark out there—came up and said words like, ‘Why are you following me?” O’Mara said. “That’s supported by the evidence. George said, ‘What are you talking about?’ And then according to George, he was hit. I don’t know what led Trayvon Martin to think that he had to do that at that point, but the evidence seems to be uncontradicted that that’s what started the physical confrontation. Was it premised by the fact that Trayvon was afraid for what George was doing in Trayvon’s mind? Maybe so.”

Watch the first segment of the interview below, via ABC: