Barney Frank: ‘If You’re A Mainstream Republican, You Want The Current Crowd Of Extremists To Lose’
video

Barney Frank: ‘If You’re A Mainstream Republican, You Want The Current Crowd Of Extremists To Lose’ 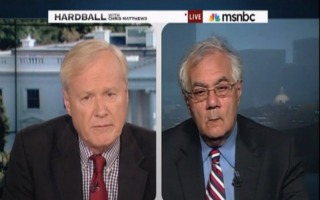 On Thursday, MSNBC’s Chris Matthews brought retiring Rep. Barney Frank (D-MA) on his program to discuss a recently released book by Brookings Institution fellow Thomas Mann and American Enterprise Institute Scholar Norman Ornstein in which they find that the Republican party is responsible for dysfunction and gridlock between Congress and the executive branch. Frank lamented the present state of the Republican party, which just received a heavy influx of freshmen swept into Congress in the wave election of 2010, and offered advice to moderate Republicans: “If you’re a mainstream Republican, you want the current crowd of extremists to lose.”

Matthews first asked Frank if he accepted that this “clinical analysis” by Mann and Ornstein was true, to which Frank responded “absolutely.”

“Democrats have gotten more partisan and tougher in response,” conceded Frank. He went on to offer former House Speaker Newt Gingrich a qualified compliment, repeating the charge in Mann and Ornstein’s book that the present state of partisanship is due in large part to governing style pioneered by Gingrich as a member of the opposition minority party and later as the Speaker representing the majority Republican Congress.

Frank went on to suggest that the Republicans in Congress have changed that equation. “You have a Republican party full of people who don’t believe there should be any government at all,” said Frank. He went on to say that there has been an increase in the vitriolic rhetoric in this Congress compared to previous Congresses.

“Not since the Civil War has there been a faction of a political party that took over a political party so far from the center,” said Frank. “And I think they’re going to get repudiated. You know, in 2010 they won because people were mad at us. But now people are looking at what they are saying and I don’t think people are ready for this.”

Frank went on to say that the tea party Republicans are repudiating even the Bush administration, as evidence of their extremism. “You have the business community, Wall Street – we hurt their feelings, I understand that,” Frank digressed. “The President and I, others, said that you’re irresponsibility brought us a lot of these problems.” Frank said that those Wall Street investors who abandoned Obama are embracing a group that would damage the economy and reduce their ability to create wealth.

“Is there any hope for the next cycle,” asked Matthews.

“In 2009, 2010 – we passed good legislation,” said Frank who cited health care reform and financial reform bills passed in the 111th Congress as evidence.

“If you’re a mainstream Republican, you want the current crowd of extremists to lose,” said Frank. “Because only after they lose, will the more reasonable people be able to take back their party.”