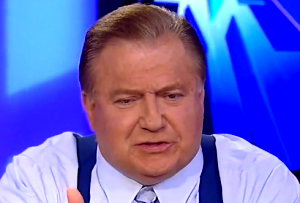 The music video for Katy Perry‘s newest song “Dark Horse” came under fire by Muslims for what was described as a “blasphemous” portrayal of a man with an “Allah” pendant being disintegrated. There was a petition that tens of thousands of people signed speaking out against it, and Perry ended up scrubbing the symbol from the video to appease critics. This did not sit well with Bob Beckel, who followed up on his rant yesterday about the Muslim “cowards” going after Perry but staying silent on terrorism. He cried, “Why is everybody caving to radical Muslims?” and “Is everybody afraid they’re going to get jihad-ed?!”

RELATED: The Five’s Beckel Loses It on Muslim-American ‘Cowards’ in Wake of Kenyan Mall Attack

Greg Gutfeld said it’s a compliment to Christianity that threats and outrage would never reach this level no matter how much they were offended. Eric Bolling pointed out a likelier reason>: Perry wants to make money off the video, and so she doesn’t want to alienate such a global audience with a single symbol so the removal was “less catering to the Muslim religion than she is to the Muslim dollar.”

Dana Perino noted that people were actively going out of their way to be offended by this, because in order to see the symbol you have to blow up the picture and go frame-by-frame until you spot it. Beckel still found it unbelievable that Muslim leaders have said jack about such threats, concluding, “There’s an awful lot of cowards in the world.”