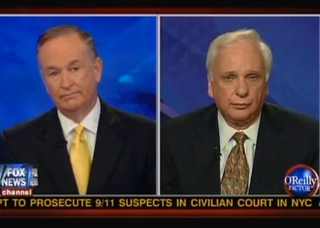 The universal media revulsion with the verdict in the Casey Anthony trial continued throughout tonight’s O’Reilly Factor, as a livid Bernie Goldberg told Bill O’Reilly he was “so disgusted with this thing I can hardly speak straight tonight.” But unlike most in the media, Goldberg wasn’t just upset at the jury or Casey Anthony herself, but at his colleague, Geraldo Rivera, who he predicted would not “be so open-minded” if the victim in this case were “a Hispanic immigrant.”

Goldberg, like many in the press, agreed that the jury had concluded something unreasonable. “The mistake that the talking heads made is they thought incorrectly that the jury had a modicum of common sense,” Goldberg railed. “This jury watched too much CSI: Miami.” Goldberg argued that they would not have found her guilty without “rock solid” evidence– a video of DNA proof. O’Reilly then presented the counterpoint (that he did not believe in), as explained in an earlier segment by Rivera.

Goldberg didn’t directly comment on Rivera’s supposition that Anthony was not definitely a bad mother, but instead introduced a hypothetical scenario: “I wonder if Geraldo and others who think like Geraldo would be so openminded if, let’s say, a militia man in Arizona was accused of killing a Hispanic immigrant and the evidence was similar to this case– a mountain of circumstantial evidence.” O’Reilly responded that he could not with any certainty answer to that hypothetical, but that he disagreed with Rivera’s position on Anthony.

But Golberg’s hypotheticals didn’t end there– he also used the same strategy to explain why the media was so obsessed with the trial in the first place. Warning that “no one is going to like what I’m about to say,” Goldberg asserted that “if Casey Anthony were a young black woman with a black two-year-old, no network would give this story ten minutes,” condemning the national media’s ability to be “incredibly shallow.”