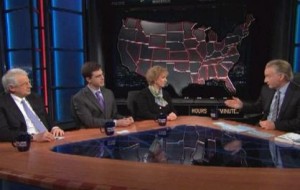 It’s time to play everyone’s favorite game: DISPROPORTIONATE OUTRAGE AT SOMETHING PRETTY INSIGNIFICANT! Tonight’s topic: Hilary Rosen-Gate! Everyone in the media has been absolutely obsessed with talking about this one comment made on CNN by a Democrat who doesn’t even have any strong ties to the Obama campaign. So naturally, this topic made its way into the discussion on Real Time with Bill Maher tonight.

Maher brought up Mitt Romney‘s problem in trying to get women to support him and the fact that he currently trails President Obama in that demographic. Former Canadian Prime Minister Kim Campbell said this was because Romney and his fellow Republicans “want to go back to the 1960s” and revisit issues like contraception that she thought had already been dealt with in the United States. David Stockman quipped that the Republicans were still stuck in the 19th century on women’s issues. Conservative writer Matthew Continetti pointed out that Romney can win the general election if he just keep the focus on the economy.

Maher brought up the statistic that a significant number of jobs lost in the recession were women’s jobs, and asked if that was mainly due to “Republican policies.” He argued that Obama was actually fighting to keep the jobs that are mostly occupied by women, like schoolteachers. Continetti noted that the Republicans narrowly got an advantage among women during the 2010 midterm elections.

And then, after four long boring minutes about “policy” and “a serious discussion of women’s issues,” Maher finally got around to the latest OMG moment to pop into the media: Democratic strategist Hilary Rosen saying that Ann Romney has “never worked a day in her life.” Now, I don’t really know who Hilary Rosen is, as far as I can see she didn’t work in any capacity for the Obama campaign, so I don’t understand the outrage. Ann Romney, of course, was right to respond in the manner that she did, and mothers in similar circumstances can provide their perspective and disagree with what Rosen said. But what is with the wall-to-wall outrage over this one comment?

Maher piped up to defend Rosen by suggesting she meant that Romney is not in the same circumstances as other mothers who do not have the same economic advantages that she does. Campbell added that Romney made a decision to be a stay-at-home mom, but for many women that’s not a viable option. Stockman tried to drag the conversation out to the big picture, that the conversation needs to be about job losses across the board as opposed to just focusing on this niche issue.

Continetti suggested that the Democrats are throwing out accusations of a Republican “war on women” to avoid having this broader discussion. And, of course, Maher ended by pointing out the obvious: despite the meme everyone loves to keep pushing, the Obama campaign is not throwing Hilary Rosen “under the bus” because she was never on their bus to begin with.

Watch the discussion below, courtesy of HBO: