Bill Maher Stands Up For Acid: Kids Are On Drugs, ‘The Problem Is They’re On The Wrong Drugs’ 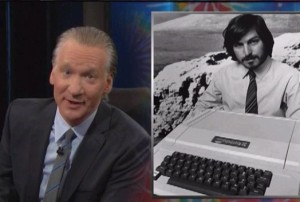 In what was perhaps one of the least political New Rules he’s ever done, Bill Maher took a look at the value of tripping the lights fantastic on acid, and why it’s one of the least harmful drugs a child could ever take. He argued that many of the greatest innovators and artists of the 20th and 21st centuries were admitted drug users, including the recently passed Steve Jobs, who admitted to his biographer that taking acid was one of the best decisions of his life.

As is often the case, Maher brought up the drug in the context of Halloween, pointing out that acid is probably healthier than most of the candy kids eat anyway, and called for parents to “put drugs in the Halloween candy!”

Maher acknowledged that this would obviously be a controversial notion, but when you factor in all the drugs parents have their children taking (including Monster energy drinks) and the sugary snacks they consume on a regular basis, Maher argued that kids are on drugs, all right, just the wrong ones.

RELATED: South Park Creators Admitting To Dropping Acid Before Cross-Dressing At The Oscars

He criticized parents who use prescription medications to “control their kids,” suggesting actual parenting as a more effective method. Then Maher brought the subject to Steve Jobs, who was very open about his past drug use, and reminded us that some of the most creative people in the last few decades were heavy drug users.

Maybe there’s not a connection between LSD and genius, but it’s something no great American ever said about a Kit-Kat bar. If it weren’t for acid, you might not have an iPod, and you definitely wouldn’t have some of the best music in your iPod.

Maher went through a whole list of people who made great accomplishments while on acid: Francis Crick, the Beatles, and himself (during the filming of D.C. Cab). He pointed to a Johns Hopkins study that found positive psychological effects of “magic mushrooms,” and recommended the Republican candidates relax and take a few shrooms themselves.