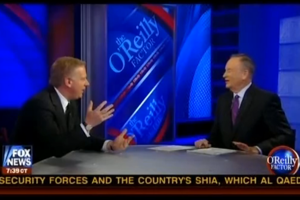 Glenn Beck must have known before going on his weekly O’Reilly Factor segment that Bill O’Reilly was going to pick on him for being praised by the left for supporting Miranda rights for all US citizens. His usual pro-Constitution argument for Miranda, however, took a strange turn when he warned O’Reilly that there was something to the fact that “the usual suspects” against torture are suddenly in favor of increased security, like Regulatory Czar Cass Sunstein. “I don’t care about Cass Sunstein,” O’Reilly replied lazily, before asking: “So, what’s the conspiracy of the day?”

Despite the fact that Beck is constantly a target of commentators across the spectrum both for his dramatic style and the complicated detailing of the Obama administration he goes through on his program every day, it’s rare to see someone be so flippant about his life’s work to his face. O’Reilly, who supports restricting Miranda to some extent in cases of radical Islamic terrorism, argued that national security should be the primary concern, and that terrorists shouldn’t be given privileges that, upon committing and act of terror, they no longer deserve.

Beck replied by asking for “no more power,” and pointing out what he sees as a dangerous tendency by the Obama administration to consolidate federal powers. “You’ve got a government right now who is saying that the tea party goers are terrorists and everything else!” As he was about to launch into an explanation of Sunstein’s– a regular on the Beck chalkboard– Marxist tendencies, O’Reilly, in his best grumpy old man voice, responded, “I don’t care about Cass Sunstein.” You should!” Beck responds, and after some crosstalk O’Reilly asks, “What is the conspiracy of the day?” O’Reilly continued by calling Beck a “history guy” who’s “got Ben Franklin running around,” and as such should “deal with reality.”

Beck took it in stride, and got back at O’Reilly by yelling at him for “[wrecking] my movie experience” in Iron Man 2, where, instead of seeing “hot chicks,” Beck had to deal with watching O’Reilly’s cameo appearance. When O’Reilly repeated that he still hasn’t had a chance to see the film, Beck channeled President Obama and noted, “See? People could be too successful.”

The “At Your Beck and Call” segment below: