Brian Williams Recants Dramatic Account of Being Shot Down in Iraq 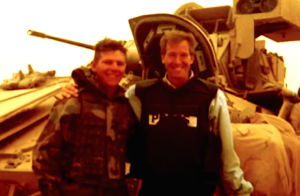 Today, Brian Williams apologized for claiming that the helicopter containing him and his crew had been shot down by an RPG in Iraq, when in fact, it had not.

As the story initially went, Williams and his news team were in a Chinook helicopter right before the invasion of Baghdad in 2003, when it was shot down by an RPG, forcing it to land. He credited a command sergeant major, Tim Terpak, for protecting their team during the incident, and recently honored him at a New York Rangers game the two attended together.

Shortly after the event, and Williams’s recounting of the event on NBC Nightly News on January 30th, Williams was called out by crew members of the 159th Aviation Regiment for misremembering the incident. As they told Stars and Stripes, “the NBC anchor was nowhere near that aircraft or two other Chinooks flying in the formation that took fire. Williams arrived in the area about an hour later on another helicopter after the other three had made an emergency landing.”

“I spent much of the weekend thinking I’d gone crazy,” Williams admitted in an apology posted on Stars and Stripes. “I feel terrible about making this mistake, especially since I found my OWN WRITING about the incident from back in ’08, and I was indeed on the Chinook behind the bird that took the RPG in the tail housing just above the ramp.”

Because I have no desire to fictionalize my experience (we all saw it happened the first time) and no need to dramatize events as they actually happened, I think the constant viewing of the video showing us inspecting the impact area — and the fog of memory over 12 years — made me conflate the two, and I apologize.

I certainly remember the armored mech platoon, meeting Capt. Eric Nye and of course Tim Terpak. Shortly after they arrived, so did the Orange Crush sandstorm, making virtually all outdoor functions impossible. I honestly don’t remember which of the three choppers Gen. Downing and I slept in, but we spent two nights on the stowable web bench seats in one of the three birds.

Later in the invasion when Gen. Downing and I reached Baghdad, I remember searching the parade grounds for Tim’s Bradley to no avail. My attempt to pay tribute to CSM Terpak was to honor his 23+ years in service to our nation, and it had been 12 years since I saw him.

The ultimate irony is: In writing up the synopsis of the 2 nights and 3 days I spent with him in the desert, I managed to switch aircraft. Nobody’s trying to steal anyone’s valor. Quite the contrary: I was and remain a civilian journalist covering the stories of those who volunteered for duty. This was simply an attempt to thank Tim, our military and Veterans everywhere — those who have served while I did not.”

Stars and Stripes noted that the recounting of the incident has shifted throughout the years, and has been repeated by NBC in different, Rashomon-like versions.

Watch the video of the segment in question:

UPDATE — 7:10 p.m. ET: Williams issued a public apology for his error on NBC Nightly News Wednesday evening, calling it a “bungled attempt by me to thank one special veteran.”

[Stars and Stripes]
[Image via screengrab]