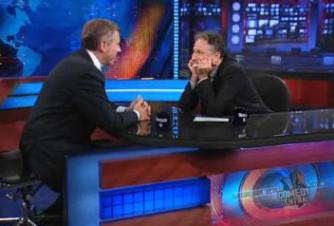 The released Mark Sanford emails revealed the lengths journalists were willing to go to get a sit-down with the Governor.

The Daily Show‘s Jon Stewart brought up the subject during the first segment last night, and revisited the topic in an interview with NBC’s Brian Williams. And Williams tried some evasive, vaguely defensive maneuvers to sidestep the issue.

First it was a lesson in journalism. “The big interviews are called ‘gets’ and within the organization…” said Williams, before laughter interrupted.

When Stewart pressed on, Williams went on the defensive. “You’ll have to ask the individuals who’s names are on those emails, Jon,” he said, half-joking. “There’s a lot of competition for these big interviews. We can’t agree to any preconditions on NBC Nightly News. We can’t say we’re going to ask you only about thus and so.”

But then Stewart mentioned David Gregory specifically (who made our Top 10 list twice), who said in an email Sanford would be able to “frame the conversation how you really want to.” Here’s Williams’ response: “Free to frame it, but David can then knock the house down. They’re big people, they’re big boys and girls, they understand this is big boy TV.”

Well Brian – funny as usual. But sadly, maybe its time to stop joking about the tactics of those at your network and others.