Bundy: If People Were Offended by ‘Negro,’ Then MLK ‘Hasn’t Got His Job Done Yet’
video

Bundy: If People Were Offended by ‘Negro,’ Then MLK ‘Hasn’t Got His Job Done Yet’ 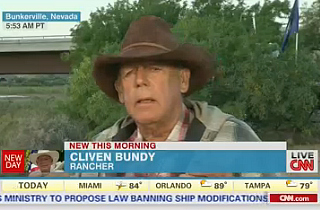 Amid the controversy over his comments about black Americans, Nevada rancher Cliven Bundy appeared on CNN’s New Day and suggested that if people are offended by his use of the word “Negro” then perhaps Martin Luther King, Jr., did not fully execute his mission.

CNN host Chris Cuomo challenged Bundy to concede that even if he is truly concerned about the well-being of blacks, his musing about whether “the Negro” was “better off as slaves, picking cotton” was offensive on a racial level.

“I didn’t say it to offend them,” Bundy asserted. “I was trying to ask a question, and maybe I said it wrong. I’m sorry if I said it wrong. The question was a good question, and it come from my heart, not done with prejudice.” He invoked the names of King and Rosa Parks, claiming for the latter that “I want her to be able to sit anywhere in the bus, and I want to be able to sit by her anywhere in that bus.”

Cuomo charged that Bundy’s remarks were the opposite of King’s peace-loving message, which provoked the rancher to concede that his wording may have been poorly chosen. “Maybe I sinned and maybe I need to ask forgiveness and maybe I don’t know what I actually said,” he said. “But you know when you talk about prejudice, we’re talking about not being able to exercise what we think and our feelings. We don’t have freedom to say what we want.”

“If I say ‘negro’ or ‘black boy’ or ‘slave,’ if those people cannot take those kind of words and not be offensive, then Martin Luther King hasn’t got his job done yet,” he continued. “I should be able to say those things and they shouldn’t offend anybody. I didn’t mean to offend them.”