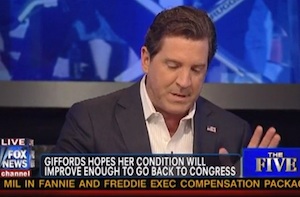 On Tuesday’s The Five, Eric Bolling spoke out on the touchy subject of Congresswoman Gabby Giffords political future. The Fox News co-host called Diane Sawyer‘s interview “very heart-warming” but thought it was probably time for her to step down. “In the risk of sounding very callous– these are tough times, the economy’s on its ear, we really need all hands on deck. For me, it seems like — forget next year — maybe even now say ‘Hey look, maybe they should hold a special election right away to see if he we can get someone who is really capable and able to make the right decisions.'”

RELATED: Gabrielle Giffords Tells Diane Sawyer How She Felt When Told Of Shooting: ‘I Cried’

“She’s got to ask herself if she can hold this seat in this condition,” co-host Bob Beckel chimed in. “It will be a rough battle. Republicans have to be careful how they take her on but they will take her on. A number of them are lined up to do it. I wonder for her own sake, for her future — they want to have a kid — I wonder going through a grueling campaign is just not too much for her or her constituents.”

Brian Kilmeade thought one of her staffers could substitute for her while she recuperated.

RELATED: Gabrielle Giffords Records A Message For Her Arizona Constituents

“The way I feel about it, play a man down in the house. Anything to make her progress better, get a chief of staff that people trust,” Kilmeade proposed. “Introduce him– you know staffers do a lot of the work anyway and see if this is something she wants to do. I think the country has to support her….if she formed a staff in her likeness, people that she believes what she believes, if they can do a lot of the work for her while she rehabs, if that is something she wants — she took a bullet to the head for this country! At least she can finish her job if she chooses!”