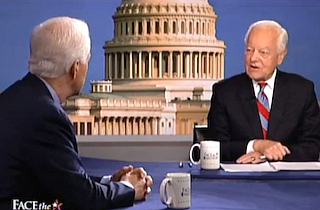 “The law has been passed,” Schieffer said. “Why not keep the government running, and then everybody can sit down and decide what they want to do about it?”

“Well, there should be a negotiation,” Cornyn said. “This government would still be up and running in full in Harry Reid (D-NV) had allowed Democrats to vote.”

“I know you can’t reach the agreement and get past this impasse if the president won’t negotiate and he’s not at the table,” Cornyn said. “We’ve moved from the defund ObamaCare effort to eliminating this congressional carve out, and eliminating the penalty on individual Americans, like the president’s done for businesses. We would have the government funded today, if Harry Reid and Senate Democrats had agreed to vote for that.”