Change We Can Believe In? Fox News Shoots Down Palin’s Coin Theory 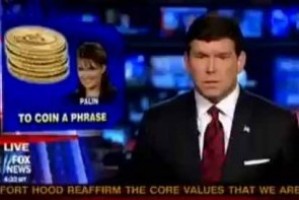 No surprise: when Sarah Palin presented a theory hinting that the phrase “In God We Trust” had been moved to the edge of $1 coins out of Democratic malice, she was met with ridicule on the liberal blogosphere.

Actual surprise: Fox News got in on the action as well.

In last night’s Special Report, Bret Baier took Palin to task for a speech before a Wisconsin Right To Life rally in which she spoke out about the “disturbing trend” of moving “In God We Trust” from the face of the coins to the rims, the clear implication being that “the new Democratic White House” was behind the move.

In fact, Baier points out, the coin’s design was commissioned in 2005 and approved by a Republican-controlled Congress and signed into law by President Bush. What’s more, in 2007, Congress reversed the decision and moved “In God We Trust” back to the face of the coin, rendering Palin’s theory totally out of date.

Baier doesn’t mention the key point that Democrats controlled Congress in 2007. As Raw Story points out, the phrase was restored to the front thanks to a bipartisan piece of legislation sponsored by Robert Byrd, a Democrat, and Sam Brownback, a Republican.

Baier’s report was mostly a recap of Jonathan Martin‘s fact-check of Palin’s speech for Politico, but do we detect a hint of snark in the caption? To wit: according to The Free Dictionary, “to coin a phrase” can be used either to ironically introduce an overused expression or “before you use a phrase which sounds slightly silly.”

Are Fox News’s caption writers calling Sarah Palin overused and/or slightly silly? If so, they deserve a Facebook rebuttal STAT.