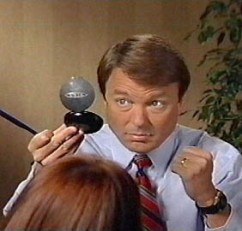 Back in the spring of 2007, long before the world learned about Rielle Hunter, the candidacy defining revelation regarding Democratic presidential contender John Edwards was that he spent $400 on a haircut. Once revealed this little tidbit of information was quickly picked up in the media, and then blown up, so that in the months going forward Edwards had to battle his dogged pretty-boy image as much, or more. as he was explaining past controversial decisions made in the Senate. The haircut story was first broken by Ben Smith at the then only three-month-old blog Politico (perhaps an small early warning sign of scooping power they would develop down the line). Yesterday Smith revealed the source of haircut tip: wonder-boy Obama campaign adviser David Plouffe. Says Smith:

Obama’s campaign had a particularly capable opposition research shop, a source of tips to many reporters, not all of them on policy. And Plouffe, in passing, outs the campaign as the source of a brief item I did in April 2007 off an Edwards campaign expenditure — probably driving as much traffic, chatter and grief as anything that short I’ve ever written.

“We did much less of this [opposition research] than other campaigns did,” Plouffe writes a bit self-servingly, “but there were times we indulged — it was our researchers who found John Edwards’s infamous $400 hair cut expenditures.”

It’s maddening when people assume political reporting is driven by opposition research when you’ve actually dug up something yourself, but in this case, I’m in no position to contradict Plouffe’s account.

So yeah, the Obama campaign, even in the very early days, understood the art of savvy, undermining campaigning. This can’t be a real shock to anyone. They didn’t win the election by playing nice all the time. How this same savvy campaigning will apply to future elections will be interesting to see. Last night on Hardball a combative Chris Matthews (who earlier took Plouffe to task for referring to the abortion debate as merely an important tree in the larger forest of the health care bill: “To a lot of people the forest is life and death, by the way!”) asked Plouffe why the White House only appears to be going after the likes of Glenn Beck and Rush Limbaugh instead of actual, elected GOP party leaders like John Boehner. Says Plouffe (video below):

I just think it’s the reality. The truth is that the Palin, Limbaugh, Beck wing of the party are calling many of the shots now. They purged a moderate woman out of that race in New York last week, I think they’re not going to stop there…that’s where the energy is. And I think that’s really what the American people are faced with, a Republican party that either doesn’t want to cooperate because of politics not principle, or they’re largely just offering warmed over Bush policies which have been soundly rejected.

If that still holds true in another six months or so, we’ll have a good idea where the inevitable Sarah Palin haircut stories are coming from.