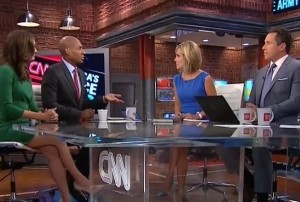 After a full week of news anchors and reporters treating Republican presidential nominee Donald Trump‘s “black outreach” as the genuine article, CNN contributor and New York Times columnist Charles Blow got a little bit fed up Wednesday morning. In a New Day panel hit devoted to Trump’s latest remarks about earning black votes by keeping them from getting shot, Blow reacted testily to Alysin Camerota for even asking him to assess Trump’s outreach, as if there were any question as to its authenticity:

What many mainstream journalists missed about Trump’s conspicuous pivot toward a show of outreach toward black voters was that it coincided with the hiring of Breitbart chief Stephen K. Bannon, whose website has made reaching out to white voters by talking about black voters its stock-in-trade.

Although more explicit in its provocations, the Breitbart narrative on black voters isn’t all that different from the mainstream Republican Party’s, which says that black voters would all be voting Republican if they only knew how good Republican policies already are. The party’s own 2012 Growth and Opportunity report didn’t suggest any policy changes to appeal to black voters, only outreach efforts to “educate” them on existing ones.